As employers in the U.S. tackle issues around racism, fresh attention is being given to the racial wage gap and why black men and women, in particular, still earn substantially less than their white counterparts. Nearly 56 years after the passage of the Civil Rights Act, “we find equal pay for equal work is still not a reality,” noted Jackson Gruver, a data analyst at compensation data and software firm PayScale.

Last year, PayScale analyzed
differences in earnings between white men and men of color using data from a sample of 1.8 million employees surveyed between January 2017 and February 2019.

Among the findings, Gruver reported: “Even as black or African-American men climb the corporate ladder, they still make less than equally qualified white men. They are the only racial/ethnic group that does not achieve pay parity with white men at some level.”

The study found that black men had the largest “uncontrolled pay gap” relative to white men, when comparing the average earnings of black men and white men in the U.S. 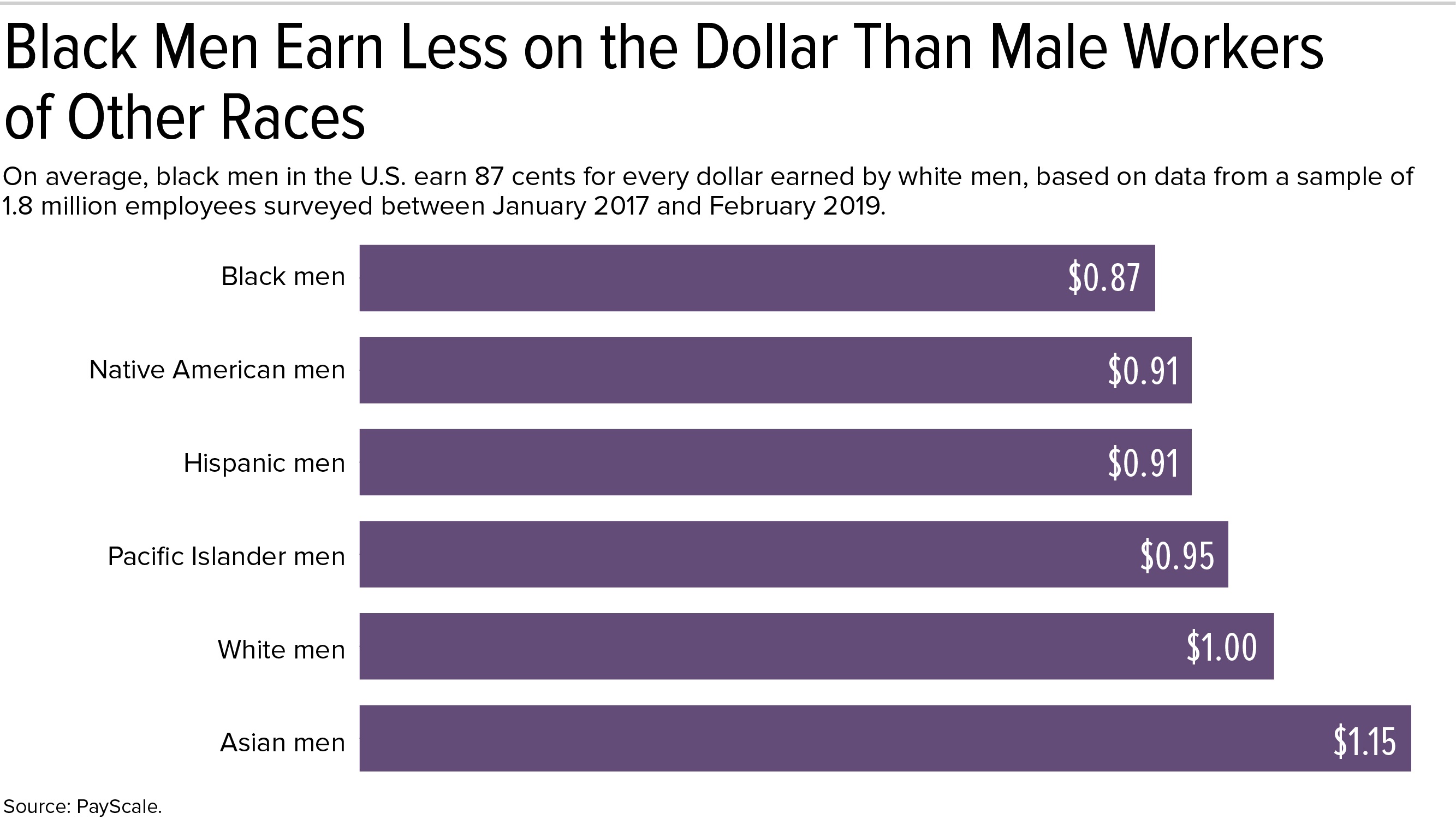 Better news was found in the controlled pay gap, a comparison of pay for black and white men with the same experience and education doing the same job in the same geographic location. This approach showed that black men earned 98 cents for every dollar earned by white men with the same qualifications. While that difference may seem small, when a 2 percent difference in pay is compounded over the course of a career, it adds up to black men taking home significantly less pay than their white male peers. 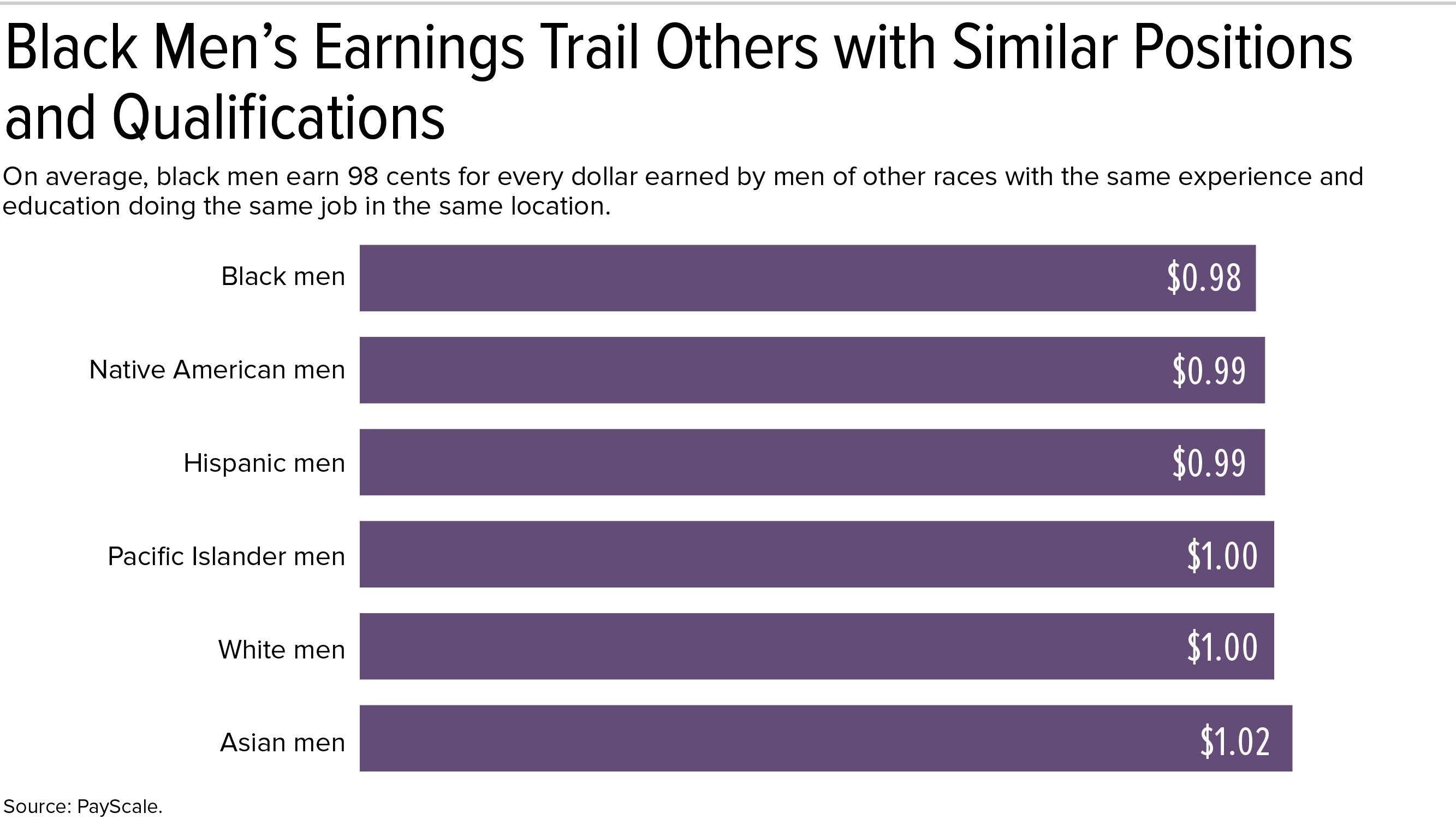 To put that in perspective, the median salary of a white man in our sample is $72,900; the controlled median pay for black or African-American men is thus $71,500,” Gruver said. “This suggests a $1,400 difference in pay that is likely attributable to race.”

Gruver attributed much of the racial pay gap to an opportunity gap and occupational segregation.

“When we look at the opportunity gap, we find men of color have higher rates of holding individual contributor jobs than white men,” he noted. The study found, for instance, that a larger percentage of black men (63 percent) and Hispanic men (61 percent) held individual contributor roles, compared with 56 percent of white men who weren’t in management.

Even when they hold management positions, black men are paid less than their white counterparts. Executive-level black men earned 97 cents for every dollar white men with the same qualifications took home, PayScale found. Even more concerning, the racial wage gap widened as black men moved up the corporate ladder.

This difference may be partly attributable to occupational segregation, meaning that black men are more likely to work in industries that generally pay less, such as social services, in comparison with white men in senior positions, Gruver said.

“Comparing what women of color are paid to what white, non-Hispanic men make demonstrates the enormous economic impact of the double burden of sexism and racism,” wrote Brandie Temple, a public-policy fellow at the nonprofit National Women’s Law Center (NWLC), and Jasmine Tucker, director of research at the organization, in an online post.

NWLC calculations, based on the U.S. Census Bureau’s Current Population Survey for 2016, revealed that when comparing all men and women who work full time, year-round in the U.S., women were paid just 80 cents for every dollar paid to their male counterparts. But the wage gap was even larger when looking specifically at black women who work full time, year-round—they were
paid only 63 cents for every dollar paid to white, non-Hispanic men.

“This gap, which amounts to a loss of $21,001 a year, means that black women have to work more than 19 months—until the very last day of July—to make as much as white, non-Hispanic men did in the previous 12-month calendar year,” Temple and Tucker observed. 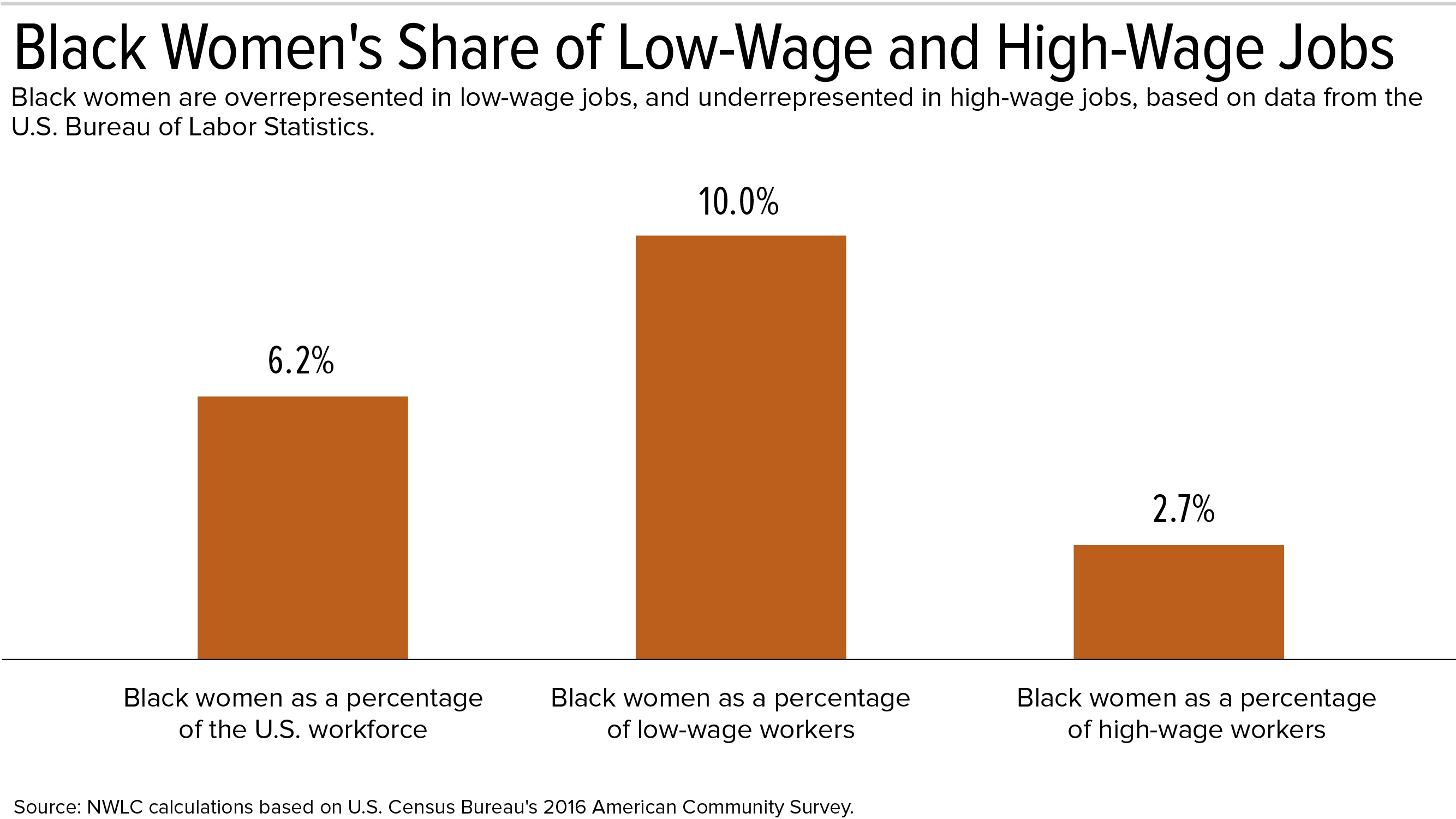 Black women who worked full time, year-round in low-wage occupations were typically paid about $21,700 annually, compared to the $36,000 typically paid to white, non-Hispanic men in these occupations, NWLC found. “This gap translates to a loss of $14,300 each year to the wage gap—more than enough to pay for an entire year’s worth of rent or more than a year and a half of child care costs,” Temple and Tucker said.

Among workers in high-wage occupations—such as lawyers, engineers and physicians—black women who work full time, year-round were typically paid about $70,000, compared to the $110,000 typically paid to white, non-Hispanic men in the same jobs. This amounts to an annual loss of $40,000 each year, or $1.6 million over a 40-year career.

Even after completing undergraduate and graduate degrees, black and Hispanic workers earned less than non-Hispanic whites with the same, or often less, education, said Roy Eduardo Kokoyachuk, a partner at ThinkNow Research, which helps companies respond to the demographic and cultural drivers that influence consumer decisions.

In a May 2020 column for the website Market Insider, Kokoyachuk wrote that “The numbers are sobering. I ran the Census Current Population Survey’s 2018 median income levels by race and bachelor’s degree attainment, and found that black and Hispanic bachelor’s degree holders
earn nearly a quarter less than Asians and whites with equal levels of education.”

Although workers of all races, on average, earned higher wages in 2000 than in 2018, Kokoyachuk pointed out that “at every level of wage distribution, the gap between black and white wages was larger in 2018 than it was in 2000,” the data showed.

The racial wage gap can be overcome, he said, if employers and policymakers are committed to taking actions such as:

While pay audits have become common
to address unconscious biases against women, racial biases should not be overlooked.

Employers should
perform statistical self-audits of pay decisions and review policies regarding starting pay, allowable pay differences, merit pay increases and promotional pay increases to root out patterns of racial bias that may be unintentional on the part of managers.

For younger workers at the start of their careers, these efforts can include “creating better opportunities for minority graduates to mingle with or be mentored or sponsored by decision-makers from other groups,” he noted. Doing so can help them build up social connections that they can use when seeking higher-paying positions.

Additional resources on addressing wage disparity and workplace-bias issues are listed below: