Perhaps the Fourth of July holiday couldn’t be coming at a better time for the workforce. With remote work having taken center stage and conversations around it focusing on appropriate levels of engagement, how to work from home consistently and maintain work-life balance, it seems a day off is just what the doctor ordered.

A recent study from healthcare benefits provider Aetna International surveyed 1,000 employees from the U.K., U.S. Singapore and the UAE, asking questions about the state of mental and physical health in the workplace. The results may not surprise you.

A little more than one-third of respondents admitted to lying about taking a sick day to deal with stress and issues related to mental health, pointing to a continued stigma around taking time for employees’ mental health.

“As a third of employees feel the need to conceal mental illness, anxiety or stress-related reasons for taking a sick day, it’s clear that there is still a high degree of stigma around mental health in the workplace,” Dr. Hemal Desai, Global Medical Director at Aetna International, said. “While some of this will be cultural, there’s clearly more that needs to be done to help line managers and employees navigate mental health at work.”

PANEL: Protecting the Future of Work from Burnout

Employees were asked whether they’ve lied to current employers about reasons for taking a sick day. While ‘wanting a day off’ was the second most frequently cited reason for lying, the most common reasons related to mental and emotional health:

But it wasn’t just stigmas around mental health. Results also showed that employees are twice as likely to take time off for a physical health issue than a mental health problem (66% versus 34% respectively).

To give these statistics context, it’s worth noting that results differ by geography. For example, employees in Singapore are among the most honest with their employers, with nearly 75% of respondents saying they’ve never lied to their boss about the reason they’ve taken a day off.

Conversely, employees in the U.S. lie on a more regular basis, with 45% saying they’ve lied to their boss to cover up the reason they’ve taken a day off. Globally, around 35% of employees say they lie for the same reason.

It’s important to recognize social stigmas around mental health, especially during the current pandemic, a time when many are left isolated and struggling with spending so much time alone and indoors. A 2018 study from the American Heart Association estimated that as many as three quarters of the American workforce have dealt with at least one issue that has affected their mental health. Around 42% indicated that they had been diagnosed with mental health issues.

With the issue so prevalent even before the pandemic, the onus has to be placed on American employers to address stigmas around mental health. If employees do not feel that they can be open and honest about their issues, the employer can’t help them take advantage of the programs included in benefits offerings and the issue could become even worse due to the stress of trying to cover it up in the workplace or from simply not dealing with it.

The Aetna report highlighted that it was the UK which has workers take the fewest sick days, as well as having the fewest number of workers taking more than 11 sick days. This points to a few potential explanations. It could be that the UK has a healthier population overall or that the country has better policies around time off, so less stigma is attached to it.

As a legal mandate, full time employees in the UK are entitled to 28 days holiday per year when accounting for national and bank holidays. With that kind of time off not only available, but encouraged to be taken by many employers, employees may not feel as much need to take a mental health day as someone who resides in a country where less time off is available.

For example, the typical U.S. worker has fewer days off, with one quarter of the workforce having no paid time off at all according to a report from the Center for Economic and Policy Research. The chart below shows the average number of days off based on years of experience, according to the Bureau of Labor Statistics. 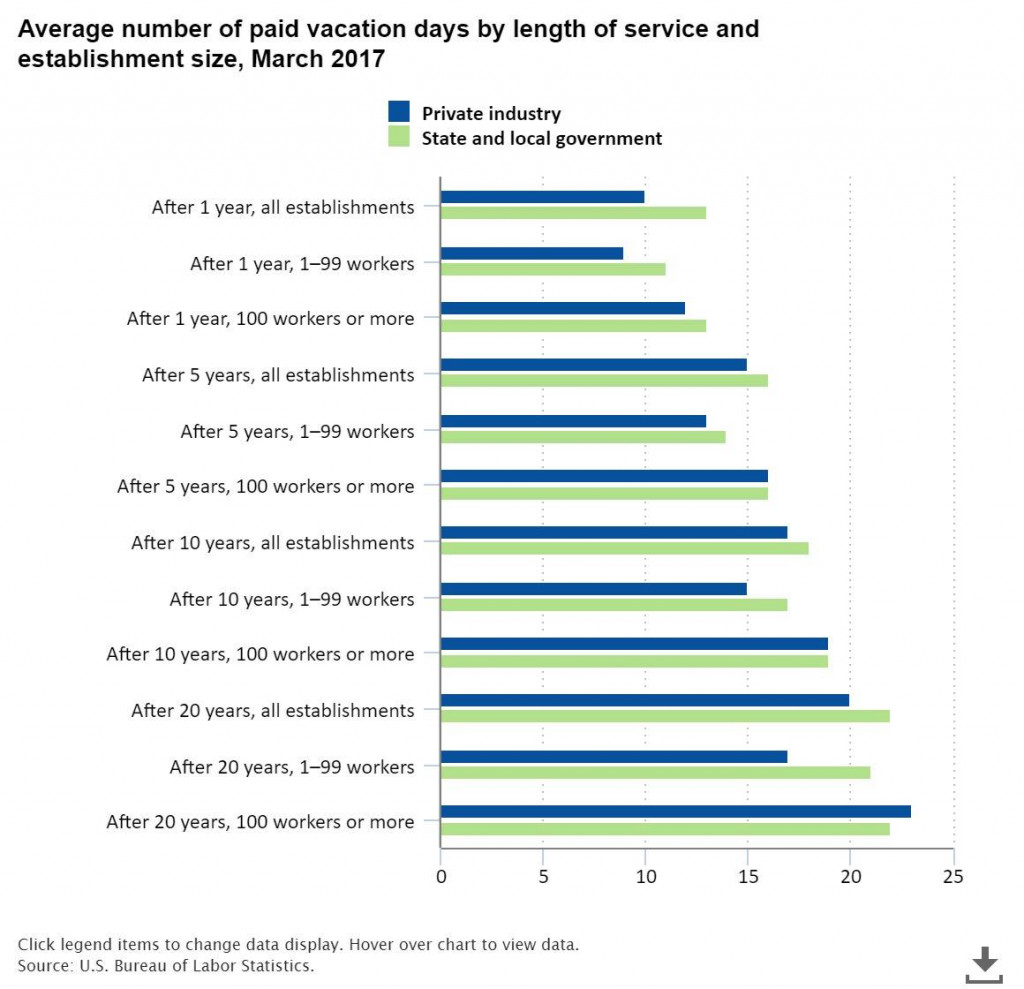 On the other hand, some workers now find themselves at the other end of the spectrum, working for companies that offer unlimited vacation time, a tactic that has been shown to lead to employees taking less time off when not instructed on how to use it properly. In any case, the result is U.S. workers not taking advantage of their time off and not addressing work-life balance in a way that is supportive of mental health.

The Dangers of No Time Off

Burnout is a significant concern right now. Many companies have been giving extra company-wide days off as part of their efforts to help employees adjust to the new normal of remote work life and to ensure that they’re taking time to separate.

As lines blur between work and personal lives for many, workers may find themselves unable to stop working. Many who are not accustomed to a remote work environment find themselves working longer hours in attempt to show their loyalty and productivity. This can lead to never switching off, an unhealthy habit that will quickly have negative consequences for mental health.

HR teams now need to remind people to step away and take a day here and there as much they need to worry about monitoring productivity. In the process, it’s a good time to make yourself available for discussions regarding mental health policies and encourage a safe environment

“Employers can take steps to improve openness and transparency on mental health issues in their workplace,” said Dr. Desai. “They can better communicate their policies on mental and behavioral health as well as the legal framework. It is important for management to foster a safe environment for employees to share the nature of their personal illness with their line manager – be it mental or physical. In this day and age, it’s not acceptable for employees to fear workplace discrimination when they’re experiencing mental illness. Instead, employers can work towards creating a culture of support when it comes to employee health and well-being. It’s particularly important at the moment as people and organizations alike grapple with the ‘second curve’ of the COVID-19 pandemic in the form of emotional and psychological issues.”