Women are at a higher risk of seeing greater earnings penalties as result of the COVID-19 pandemic, pay analysts warn. That’s because women are “more likely to have to take time off work, or even resign their positions, in order to care for children who are no longer in school as well as other family members,” according to
The State of the Gender Pay Gap 2020, a report from PayScale, a provider of on-demand compensation data and software.

The firm’s research shows that women often incur a pay penalty on returning to work after a prolonged absence—earning 7 percent less on average than men in the same position.

“As the pandemic continues and uncertainty plagues the workforce, women are being disproportionately impacted
as child care solutions are scarce and the pressure to balance work and parenting increases,” said Tanya Jansen, co-founder of beqom, a cloud-based compensation software firm. “The pressure is on business leaders to reassess their compensation systems to create an equitable environment for women within their companies and to keep society from taking major steps back in gender equality,” she said.

Many employers have been taking action to remedy gender-based pay disparities. For instance, the percentage of employers conducting a gender-based pay equity analysis rose to 56 percent in 2020, up from 35 percent in 2016, according to a recent study of 1,157 organizations by HR consultancy Mercer. The increase reflects a growing commitment by corporate leaders to achieve pay equity for women, according to the firm’s report
Let’s Get Real About Equality.

“It is difficult to implement pay increases to correct for inequities when, for many, pay increases of any kind are off the table” due to business challenges related to the pandemic, Mercer consultants Brian Levine and Haig Nalbantian wrote in an
analysis of the findings. Under these circumstances, they advise employers take these measures:

Another pay hurdle women face was highlighted in a new study by Nulab, a cloud-based compensation software firm, which found that
women promoted to leadership roles within the company are likely to receive a lower raise than a man would receive.

“The gender pay gap is still a very real and prevalent problem when it comes to leadership roles and compensation,” said Analisse Dunne, people operations manager at Nulab. “Employers can do their part to eliminate this discrepancy by ensuring that decisions regarding compensation are both thoughtful and performance-based.”

“Women face extraordinary challenges in being heard, seen, and dealing with their own confidence issues,” said executive coach Susan Hodgkinson, founder of The Personal Brand Company. Only part of the issue can be addressed by coaching woman, she said, “because the people who actually need to change are the people with gender-biased and just generally biased belief systems—typically the men in charge. Inclusion is necessary, not elective, for success for individuals and the companies that they represent.”

The gender wage gap, however, is wider for Black and Hispanic women at the individual contributor level and continues to widen as they move up the organizational ladder. 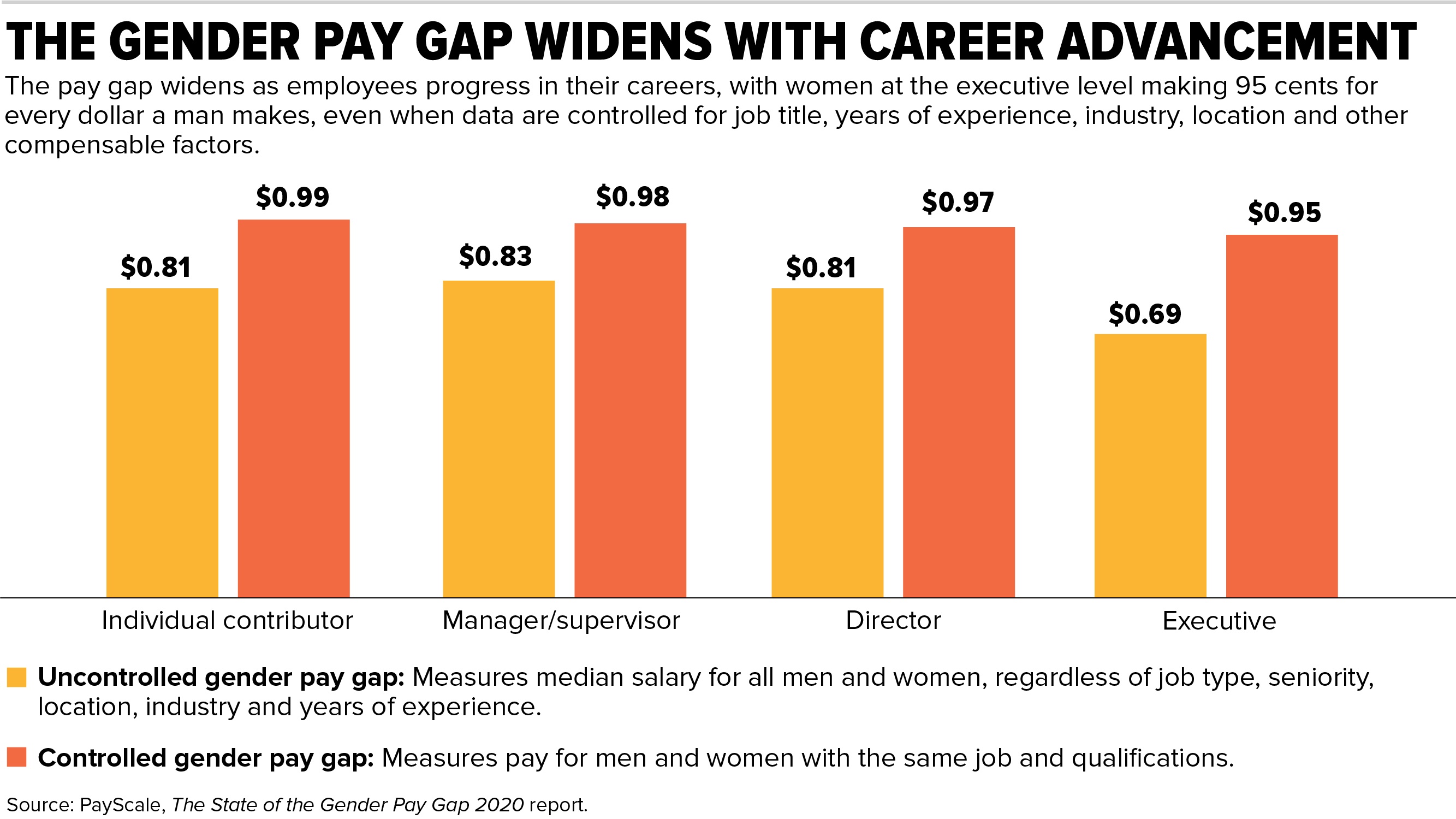 Martine Ferland, Mercer’s president and CEO, commented that “policies, processes and programs need to be aligned and connected to eliminate bias—especially the unconscious bias that leads people to hire and develop people who look, talk and think like they themselves do.”

Further progress in pay equity requires “getting women into leadership positions,” Lisa Harpe, principal consultant at DCI Consulting Group, said during WorldatWork’s Total Resilience Virtual Conference & Exhibition. “We need to ask where women are in the workforce” and whether they’re being excluded from higher paying jobs and leadership positions.

Beqom’s Jansen added that by addressing unconscious bias in hiring and promotions, making compensation practices transparent and providing more flexibility for employees, “during these difficult times, employers can work to empower their workforce equally, regardless of gender.”