That’s because when the bank opened in late 2019, it took into account the large deaf and hearing-impaired population attending or working at nearby Gallaudet University. Six of the branch’s nine employees are fluent in ASL, including three who identify as deaf or hard of hearing. Bank employees who don’t sign can communicate with deaf customers using the bank’s video-interpreting service or by typing on a specially designed tablet. Sign language interpreters are on hand to assist employees who are deaf in working with customers who are not.

When the coronavirus pandemic forced many businesses to shutter last spring, Chase opted to keep the deaf-friendly bank open, installing clear, plastic barriers, limiting occupancy and taking other precautions to minimize spread of the disease.

“As a bank, we want to make financial services available to all customers, including people with disabilities and their families,” says Jim Sinocchi, head of the office of disability inclusion at JPMorgan Chase, Chase Bank’s parent company.

Sinocchi isn’t just interested in attracting new customers. He wants Chase to be the employer of choice for people with disabilities.

“When people see a company that reflects themselves, they’re more likely to purchase goods and services from that company,” he says.

It’s a credo that’s backed by mounting research linking disability-inclusion efforts to increased innovation, lower turnover and reduced exposure to discrimination claims. A 2018 Accenture study found that companies actively looking to include people with disabilities in their organizations had 28 percent higher revenue, double the net income and 30 percent higher economic profit margins. The U.S. economy could get a boost of up to $25 billion if more people with disabilities were to join the labor force, the study found.

The 30-year-old Americans with Disabilities (ADA) Act has helped expand job opportunities for individuals who are blind or deaf or who have mobility issues or other impairments. But significant barriers to employment still exist. In 2019, only 19.3 percent of people with disabilities were employed, compared with 60.8 percent of the general population, according to the U.S. Bureau of Labor Statistics. The unemployment rate for disabled individuals—7.3 percent—was about double that of the general population. 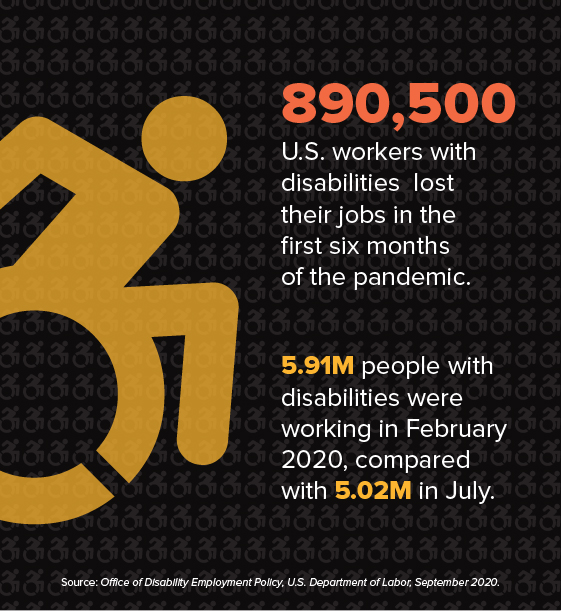 The pandemic has had a devastating impact on people with disabilities. Between February and July of 2020, some 890,500 workers in this population lost their jobs, according to the U.S. Bureau of Labor Statistics. As in the general population, employees with disabilities working in service occupations were the hardest hit, accounting for more than a third (33.9 percent) of jobs lost.

Despite the disheartening numbers, some disability advocates say there is cause for optimism.

Jill Houghton, president and CEO of Disability:IN, a nonprofit in Alexandria, Va., that provides resources for businesses seeking to employ people with disabilities, says a growing number of well-known employers, including Amazon, 3M, Google and Disney, are tapping into the organization’s recruitment pipeline. Even with the pandemic ravaging the workforce, Disability:IN’s members collectively hired almost 28,000 disabled workers last year, a 53 percent increase over 2019.

In addition, employers are increasingly interested in knowing how their disability-hiring programs stack up against their competitors’, Houghton says. Over the last five years, the number of organizations participating in Disability:IN’s Disability Equality Index, a benchmarking tool that ranks businesses on their disability-inclusion practices, has increased to 247 from 43.

“While we still have much further to go in terms of reaching equal employment rates between people with disabilities and those without, we see progress,” Houghton says.

Recent advancements in assistive technology are also helping to expand opportunities for workers with disabilities. Teleconferencing platforms that link deaf individuals to ASL translators and software that reads printed text aloud are among the growing array of services helping to level the playing field

Scott Wills, a research chemist at Dow Chemical in Collegeville, Pa., says he found a well-qualified pool of interns and potential full-time workers when he began recruiting at the National Technical Institute for the Deaf (NTID), a college within the Rochester Institute of Technology in Rochester, N.Y. Dow began sponsoring NTID co-op students in 2011 and has hired six of them to work full time, mostly in chemistry and computer science jobs.

While some Dow managers worried about their ability to communicate with the deaf students, those concerns evaporated once easy-to-use no- and low-cost solutions were presented, Wills says. For instance, when deaf and hearing employees need to talk to each other by phone, they can call a free video-relay service that uses video equipment to link the deaf employee with a sign language interpreter who translates both sides of the conversation. The deaf employee and the interpreter can see each other signing over a computer monitor.

During the pandemic, as all Dow employees work from home and rely on telephone and computers to communicate, such systems have become a “great equalizer,” he says.
As manager of Chase’s deaf-friendly bank in Washington, D.C., Diana Jimenez is working with deaf employees and customers for the first time.

“We’re all learning a little bit every day,” she says.

To help make sure it got the workplace design right, Chase partnered with Gallaudet University architects to optimize visual and physical communication throughout the branch. Several building features help ensure the safety of deaf workers and customers, including light indicators to alert workers when someone has entered the branch and reflective wall panels that allow deaf customers to see shadows and notice when someone is behind them. Additional consultants were hired to help interview deaf applicants to ensure that their American Sign Language skills and demeanor were up to snuff.

Widespread acceptance of work-at-home arrangements have been a blessing in disguise for some mobility-impaired workers who previously were excluded from corporate recruitment efforts because they had difficulty getting to an office.
Before the pandemic, Voya Financial Inc. mostly limited its search for talent to areas near its eight main offices.

“It had always been our expectation that work needed to be done in the office,” says Lisa Fleury, senior vice president of talent acquisition and HR operations at Voya, a financial services company based in New York City.

Once it became clear that many jobs could be done successfully from home, Voya’s recruiters began casting a wider net. The effort paid off, resulting in the hiring of six interns from across the country through the NextGen Leaders program at Disability:IN.

A dedicated employee relations team within the HR department stays in frequent contact with the workers to ensure that they have the support they need and that efforts to provide that support are ongoing, Fleury says. For instance, the company is looking into ways to improve captioning and real time speech-to-text technology for deaf and hearing-impaired workers.

For visually impaired individuals, computers that quickly translate text to speech have been a game-change.

In the early 1980s, Raymond Hepper, a retired energy lawyer in Massachusetts who has been blind since birth, faced an uphill battle trying to convince employers to hire him—despite his Ivy League law degree and stellar grades.

An open-minded hiring manager at the U.S. Justice Department gave him his first big career break in law. But Hepper still recalls more than 100 unsuccessful interviews and the sting of being told by at least one law firm that he couldn’t do the job. The inability to access printed materials was a major obstacle, he says.

“I can get almost everything I need from a computer with text-to-speech technology, which is available for free or a minimal cost,” says Hepper, who serves on the board of trustees for the Perkins School for the Blind in Watertown, Mass., which prepares visually impaired young adults for college and employment.

Kari McHugh, senior director of consumer and community relations at Dunkin’ Brands, was so impressed with Perkins’ training that she hired one of its graduates to staff the doughnut and coffee purveyor’s Canton, Mass., customer call center, which historically has struggled to recruit and retain qualified workers.

“It’s been a great match for us,” says McHugh, who also has worked with the Massachusetts Commission for the Blind to hire and place four additional visually impaired customer service workers.

Dunkin’ hiring managers and supervisors worked closely with vocational counselors from Perkins and the commission to make sure the various adaptive technologies that are supposed to be built into Salesforce, the database Dunkin’ relies on to manage customer relations, work without a hitch, she says.

While technology has made it far easier for workers with disabilities to do their jobs, its advantages can be blunted by websites that aren’t designed with accessibility in mind

Finding a job is a challenge for visually impaired workers if job search websites and company application portals aren’t developed to be accessible with a screen reader.

Further, company sites that are used by employees also need to be accessible for visually impaired people to do their jobs.

“The challenge is demonstrating to businesses that designing accessibility into online platforms will benefit their recruitment, retention and customer satisfaction,” Hepper says.

Job seekers with disabilities often wrangle with the question of when to disclose their disability to a potential employer since including the information on a resume or application could mean they’ll be immediately disqualified. But catching a potential employer off-guard by, say, showing up with an interpreter could also be self-defeating.

Employers’ growing willingness to diversify their workforces goes hand in hand with more systematic, less chaotic ways of matching disabled workers to the right job, says John O’Neill, director of the Center for Employment and Disability Research at the Kessler Foundation in East Hanover, N.J.

Until recently, charities and vocational rehabilitation groups often inundated employers with requests to place these workers, but often had little understanding of the employer’s needs.

“The result was a high rate of failure,” O’Neill says.

However, a growing number of faith-based and community groups, community colleges, workforce investment boards, and labor organizations now seek to aid both workers with disabilities as well as employers.

“There are organizations in every community that are preparing people [with disabilities] for employment,” he says. The key is finding the right match between the employee’s skills and the job.

Rita Zeidner is a freelance writer based in Falls Church, Va.

A Million People with Disabilities Have Lost Jobs During the Pandemic
About 1 million U.S. workers with disabilities have lost their jobs since the pandemic began in March 2020, according to the New Hampshire University Institute on Disability.

ABLE Accounts for People with Disabilities Are a Timely Benefit
Employers can provide tax-advantaged accounts as a workplace benefit.

The ADA at 30: Looking Back and Ahead
Despite significant progress for U.S. workers with disabilities, many barriers to employment remain.

SHRM How-to Guide: How to Handle an Employee’s Request for an ADA Accommodation
Follow these nine steps when you receive an employee request for an accommodation under the federal Americans with Disabilities Act.

SHRM Toolkit: Accommodating Employees’ Disabilities
The federal Americans with Disabilities Act requires employers to provide reasonable accommodations to qualified job applicants or employees with disabilities except when such accommodations would cause an undue hardship. Many accommodations can be achieved relatively easily and at little or even no cost to the employer, a study by the Job Accommodation Network found.

SHRM Toolkit: Developing an Accessible Workplace
Organizations have many sound business reasons for hiring people with disabilities and for ensuring that the workplace is accessible. Here are some ways to do that.