There’s nothing wrong with masculinity, but it’s essential to separate traditional masculinity from the toxic behaviors that create negative cultures.

Clinical psychologist and author Dr. Ellen Hendriksen says toxic masculinity occurs when respect and deference are mistakenly conflated. Traditional masculinity typically involves the expectation of respect or admiration for one’s abilities or accomplishments. Respect can be equal and reciprocal between colleagues; it doesn’t imply ranking or hierarchy.

But toxic masculinity is different, Hendriksen says, because those who practice it call for deference. They believe others should comply with their rules or submit to them. That automatically creates a pecking order.

Toxic masculinity involves an ultra-competitive, dog-eat-dog work style that supports a patriarchal system designed to keep men on top. It encourages the mindset that outspoken men are assertive, while outspoken women are aggressive. Toxic masculinity is on display when men interrupt or talk over women, take an inflexible attitude, and navigate the workplace like a battle zone to be conquered. These behaviors keep the “old boys club” alive and well in our workplaces.

Masculinity becomes toxic when it’s tied to behavior designed to “get ahead at all costs,” says Lisa Hickey, CEO of Good Men Media Inc. and publisher of The Good Men Project, an online social and editorial platform. The same toxic message is echoed in phrases such as “Winning isn’t everything—it’s the only thing.” When these attitudes take hold, abusive behavior that helps men get ahead is minimized, normalized or even encouraged, depending on the workplace culture.

These ideals of masculinity can become “all about asserting power and dominance in the workplace, and that often includes using systemic sexism and racism to an individual’s benefit,” Hickey says. 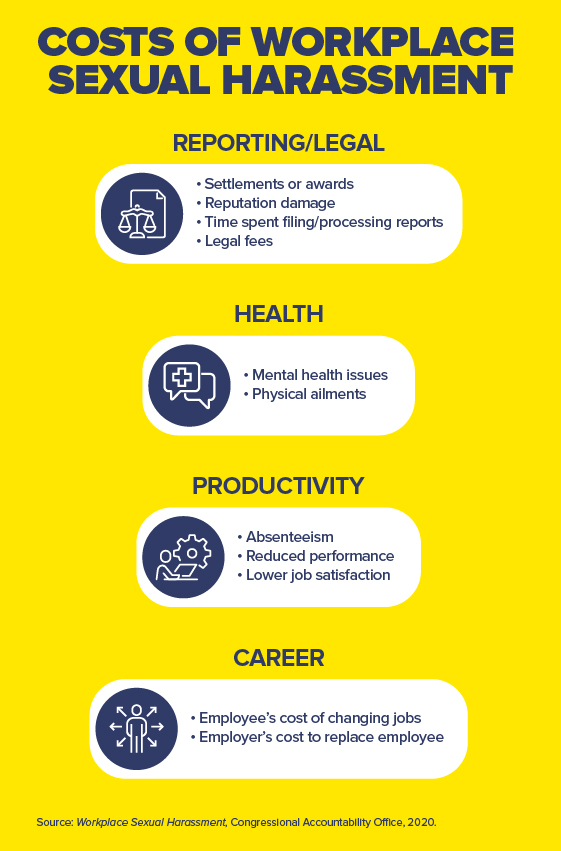 It Hurts Men, Too

Men are not immune to harmful forms of masculinity. In some cases, the environment created by this masculine ideal may be unhealthier for men than for women in an organization. Men who are subjected to gender stereotypes at a young age often believe they must be dominant and in control to be manly. When they don’t feel they possess the traits of a “real man,” they may overcompensate with behaviors perceived to fit the mold. Unfortunately, the impact of these behaviors can affect co-workers, creating a toxic work environment.

Jacob, a male employee at a midsize financial firm who asked that only his first name be used, experienced the impact of toxic masculinity at work. When his company expanded employee benefits to make men eligible for a paid, six-week paternity leave, Jacob’s wife was eight months pregnant. Elated that he would be allowed to bond with his new child longer than the two to three days he had taken off work for the birth of his other children, Jacob planned to take the full six weeks immediately at the end of his wife’s maternity leave. Upon learning of his plans, Jacob’s colleagues, both men and women, showed obvious disapproval of his decision. Jacob heard comments, both to his face and behind his back, that he was abusing the system and that it would be disappointing if he actually took the time off.

“Ultimately, I changed my mind because I feared losing the respect of my colleagues,” he says. “I have a goal to lead a team of my own someday, and I worried about how this would potentially affect future opportunities.” As a result, he took only a few days off following the birth of his daughter.

A company’s expansion of leave should represent a win for all employees. But the only employees in Jacob’s organization who are currently benefiting from the company’s parental leave policies are the women who are expected to take time off to fulfill caretaking roles.

When these behaviors—both the aggressions and concessions—continue to go unnoticed by leaders and even employees, toxic masculinity will be the norm. The fight against toxic masculinity is not a campaign against men; it’s a campaign for men to feel they can step outside the “man box” and be authentic in the workplace. 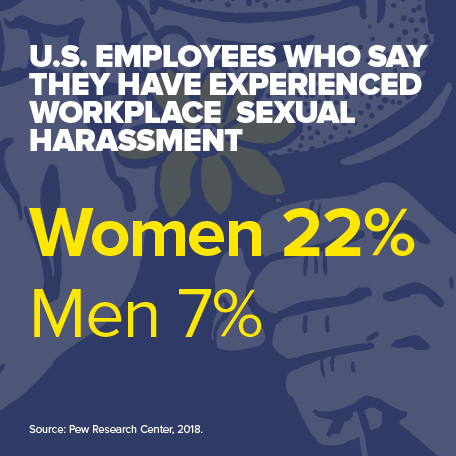 Companies commonly mandate annual training for all employees around sexual harassment and diversity. But such efforts can make shying away from uncomfortable realities too easy. For instance, the Society for Human Resource Management found that 98 percent of companies have diversity training focused on gender, yet only 25 percent of people from diverse groups say they have benefited from the programs.

When leaders fail to see how toxic masculinity influences their teams’ dynamics, the whole organization will fail. Sexism, racism and general intolerance will remain, and the culture will be resistant to much needed―and wanted―change.

If there’s uncertainty in how to go about measuring the real culture, ask employees. Start with these questions:

Finally, ask what can be done to reverse societal norms that shape organizational cultures.

Micro-learning modules can be useful when following up DE&I training. When employees are given incentives or badges, like many micro-learning programs provide, they often feel a desire to do well in an activity. Continued exposure to DE&I information may result in a change to previous beliefs and behaviors.

Training shouldn’t be just a class on DE&I that covers the legal issues and risks. Instead, it should encourage behavioral changes and highlight social benefits to all employees. 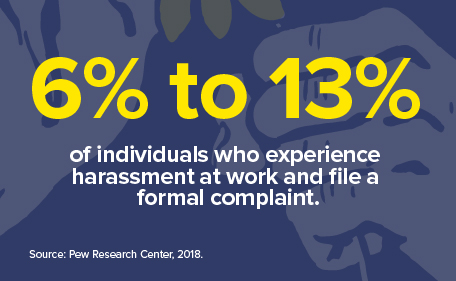 Encourage Employees to Speak Out

Incidents of toxic masculinity happen every day at nearly every organization, although they are not usually taken to HR as complaints, workplace psychologists say. “SHRM’s own research has identified the power of interactions where toxicity is at play with roughly 54.5 percent of workers indicating a perceived toxic situation in the first three weeks at their organization.” says Alexander Alonso, SHRM chief knowledge officer. “The impact is remarkable with that level of toxicity attributable to excessive masculinity yielding turnover in 3 out of every 10 situations in my experience. Colleagues and peers never truly estimate the cost of a ‘harmless’ joke or supposition.”

Leaders at all levels need to gather stories from their people to see if this problem exists in their companies. A survey of female employees at Nike’s headquarters in Beaverton, Ore., uncovered a long-standing gender inequity problem and sexual-harassment complaints.

Speaking out against these types of behaviors can move an organization toward a culture that no longer tolerates sexist displays, such as asking a female colleague to take notes or make coffee, experts say. Pluralistic ignorance—where most members of a group privately disagree with what the perceived attitudes of the group as a whole—contributes to the ongoing tolerance of toxic masculinity in the workplace. Encouraging all employees to speak out may recalibrate attitudes and cause that perception to fade.

Experts agree that to truly create a culture change, everyone in an organization must open their eyes to see the displays and subtle effects of toxic masculinity, and that leaders must set the example. No one wins in a dog-eat-dog environment. Without recognizing that toxic masculinity is a genuine phenomenon, there will be no real equity, diversity or inclusion in the workplace.

Holly Althof is a freelance writer based in La Porte City, Iowa.

How Masculinity Contests Undermine Organizations, and What to Do About It
Why do companies get caught up in illegal behavior, harassment and toxic leadership?Research identifies an underlying cause: a “masculinity contest culture.”

Bridging the Gender Divide
White men continue to dominate corporate America’s hierarchy, but some companies are making efforts to change the landscape.

What Are the Different Types of Sexual Harassment?
According to the Equal Employment Opportunity Commission, there are two types of sexual-harassment claims: quid pro quo and hostile work environment. The federal agency provides guidance on defining sexual harassment and establishing employer liability.

Have You Seen These Gender Biases During Job Interviews?
Women, trying to be likable, may not paint a full picture of their accomplishments. Men generally exude more confidence.

Subtle Sexism and the Open-Office Floor Plan
Executives considering whether to redesign their offices to modern, open-office floor plans to foster collaboration and improve creativity may want to think again. Some women say “being on display” impedes their productivity and erodes privacy.

SHRM Research: The High Cost of a Toxic Workplace Culture
Failing to build a strong workplace culture is not only detrimental to employees, but it’s also bad for business. That’s why workplace decision-makers need to be deliberate and persistent in creating a culture that can produce innovation and growth. The alternative is highly costly, in more ways than one.

DEI: 4 Best Practices for Organizing Effective Employee Resource Groups
Tech Layoffs Are Deteriorating DE&I Efforts
UK: Making Reasonable Adjustments for Dyslexic Workers
8 HR Trends to Ponder Ahead of 2023
Bryan McComak: In HR, a Variety of Lenses Help You Figure It All Out