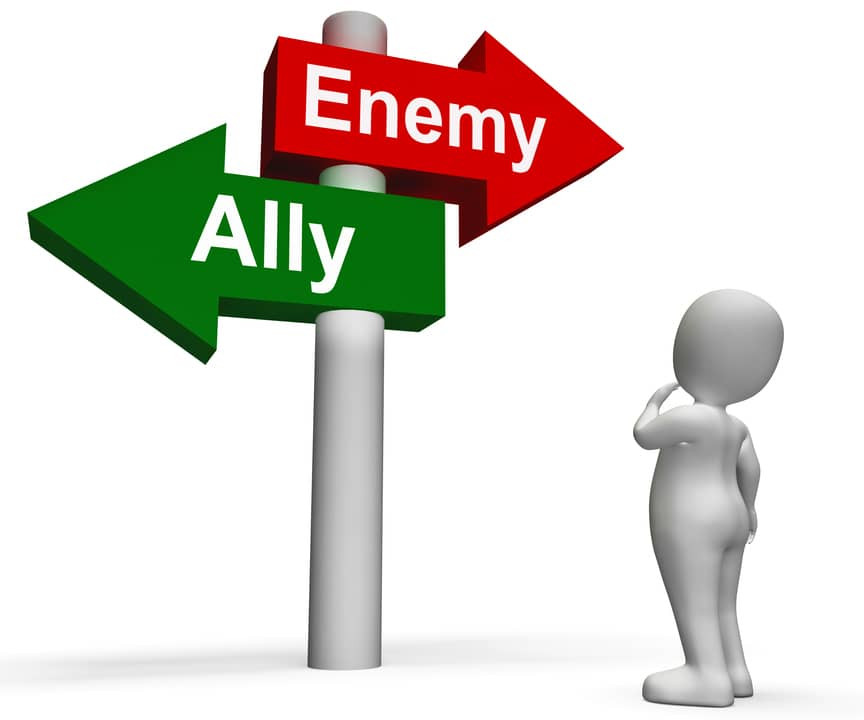 Diversity and inclusion is on everyone’s minds these days. It’s in the news and audiences are becoming more aware of systemic racism each day. It has left businesses in a place where failing to meet expectations on diversity and the promotion of inclusive environments is flat out bad for business.

While we live in a time where more people than ever want to be advocates for change, many struggle to understand how they can drive it or the work that needs to be done. Allyship, therefore, has become a hot topic of conversation in the realm of DEI. It’s something leaders and managers have to buy into and, importantly, is not meant to be some exercise in white guilt.

What Do We Mean by Allyship?

Ally can be a confusing term. It can be mistranslated into meaning helping someone or simply being on the same side as them. But it is more of a decisive action than simply a shared interest and it’s not just a vehicle to help promote or endorse people of color who are perfectly capable of achieving their aspirations without the blessing and assistance of their white colleagues.

An article for Forbes defines an ally as “any person that actively promotes and aspires to advance the culture of inclusion through intentional, positive and conscious efforts that benefit people as a whole.”

When we talk about allyship, what we’re really talking about is joining of ambitions and the capability of achieving those ambitions between like-minded people. Carla Wallace is the co-founder of Showing Up for Racial Justice in Louisville, an activist organization focused on mobilizing whites to work for an end to racism and white supremacy. Last year, during the peak of the George Floyd protests, she described allyship in an interview with the Associated Press as: “it’s about me joining whatever power I have with the power that black and brown people have. It’s about, what is our mutual interest in working for a different society? … We must move from it being something that we do when we have time on a Saturday to something that we do because our lives depend on it.”

READ: Diversity and Inclusion: HR’s Guide to a Successful Strategy

Allyship, as Wallace mentions there, can’t be some side project. It has to be built into people’s priorities. It’s a lifelong endeavor that emphasizes the building of relationships on accountability, trust and consistency in how one approaches and works with people of different backgrounds and abilities.

Nor is it something that the person attempting to be an ally can define or identify as. Allies must be recognized as just that by the people they seek to be allies with. And how people take action as allies can differ. It may be public advocacy, or it may be something as simple as sharing growth opportunities, allowing a person to vent without becoming defensive or believing them when they share their experiences.

The Benefits of an Inclusive Work Culture
Data from LeanIn indicates that, “despite an overwhelming majority of white employees seeing themselves as allies, less than half of Black women and only slightly more than half of Latinas feel they have strong allies at work.”

A 2019 Deloitte report titled The Bias Barrier suggested that allies could be the “missing link” in the mission to make organizations more inclusive. Employees in organizations with cultures of inclusion and allyship report feeling higher levels of happiness and are more likely to go above and beyond for their employers. Turnover is better for these organizations and employees report being motivated to improve their performance at greater rates. They are also 75%less likely to take a sick day and up to 167% more likely to recommend their organizations as a place to work.

Psychological safety is one of the key benefits of allyship and a culture of inclusion. The Deloitte research concludes that on teams where workers feel psychologically safe bringing their views to the table will be well positioned to engage in productive friction—or the ability to bring about conflict and learn from disagreement.”

Much of the activism we see these days is performative, whether it’s outrage, shock or the usual blend of hashtivism that spreads across social media. For all its virtue signaling and parading on the moral high ground, there isn’t much in the way of substantive action that comes from it.

A report from Bentley University’s Center for Women and Business (CWB) titled “Elevating Allyship in the Workplace” highlights exactly this type of performative allyship as a hurdle to progress. Defined simply, it’s when individuals or organizations share information about inequities but fail to take meaningful action to make change.

A barrier to employees becoming true, authentic allies is personal discomfort. Helping people see that it is not only somewhat natural but that there are ways to lean into that discomfort is productive.

“If you are developing an organizational allyship program, leverage proven best practices and view the journey as an iterative process, allowing for trial and error along with transparency about mistakes,” Trish Foster, Executive Director of CWB says. “Take a flexible approach and recognize that even the most sophisticated organizations face challenges when it comes to allyship and inclusion.”