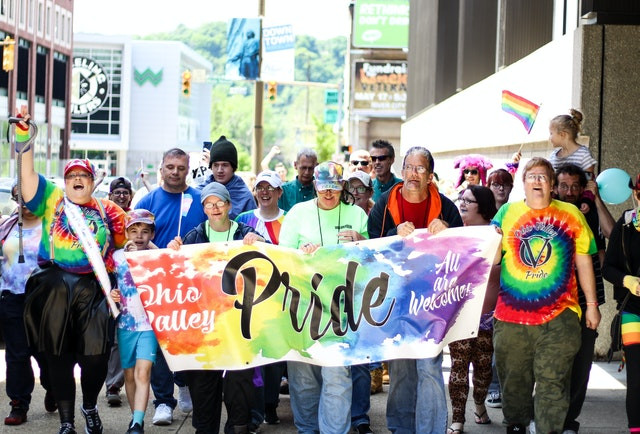 It’s Pride Month and that means a lot of rainbow themes are being rolled out in marketing across the corporate world as companies rush to re-colorize their logos and publicly show support for LGBTQ+ employees.

But in 2021, as you might imagine, simply piping the colors of the rainbow through your logo or changing your social media backgrounds to pride flags simply isn’t going to cut it. We’re in the era of actions meaning more than words to both consumers and employees and meeting people’s expectations for providing an inclusive culture where everyone’s wellbeing is prioritized is more of a mandate than a lofty goal.

As a result, many HR teams are taking a different approach to Pride Month in 2021. Burger King, for example, announced that it will make a donation to the Human Rights Commission for every chicken sandwich they sell in 2021. Adidas, on the other hand, has developed Pride specific footwear and supports Athlete Ally, an organization focused on supporting LGBTQ inclusion in sports.

This is fitting, as Pride Month is really in celebration of a movement rather than simply “standing in solidarity” with the LGBTQ community. What matters is not the gesture but the actions that go into supporting that community.

Of course, this isn’t to say that the public displays of support by altering logos and making statements to similar effect aren’t welcome and even helpful in the sense that they do show the public that this is where your organization stands on these issues. That said, it really doesn’t do much to help advance equality for the population it claims to support or even institute any kind of meaningful change.

What Can You Do?

Some employers have begun to offer education on LGBTQ issues and as workforces expand beyond operating in a single country or even continent, this can be especially helpful in level setting when it comes to company culture.

The world is, put simply, in different places on LGBTQ issues. While in much of Europe or North America it’s quite common to publicly stand in support of these communities, that may not be the case in other parts of the world. Educating a global workforce is important as it creates a norm across geographic cultures that has to be established to build an inclusive workplace environment.

Bringing employees together around these issues and engaging them on what they want to see can reveal some important insights and make them feel as though their voices are heard. Checking in with LGBTQ employees at a time when so many states are weighing legislation that is unapologetically anti-trans and will likely encourage violence and discrimination against these communities is a good way to bring those employees closer to the organization and put your money where your mouth is, so to speak, on supporting these communities.

There are no shortage of organizations that can help you do this, from the National Center for Transgender Equality to The Trevor Project, which focuses on suicide prevention in the LGBTQ community. Perhaps somewhat ironically, all it takes is a quick Google search to uncover a variety LGBTQ charities that support the health and wellbeing of that community.

Still So Far to Go

There are still a great many companies struggling to find their footing on LGBTQ issues, but few have taken more high profile hits in the last few years than Google.

After being on the Human Rights Council’s LGBTQ Equality Index for several years, Google lost its place in 2019 after it refused to remove an app from the Google Play store that provided “conversion therapy.”

Since then, a number of issues have come up around LGBTQ issues for Google, with employees complaining about an assortment of problems ranging from being targeted by co-workers to policies on its platforms regarding the treatment of the LGBTQ community.

In the last week, employees across Alphabet Inc., Google’s parent company, kicked off the #DropTheDeadNames campaign. Deadnaming refers to the practice of forcing employees who have transitioned to a new identity to be identified by the name associated with their former identity. Whether on identification badges or in internal communications, Google has forced employees to identify by their dead names.

Google is just one example in a world where many others exist. Some actually embrace their anti-LGBTQ policies and stances as part of their corporate culture and image. A good example of this is Chick-fil-A, whose CEO has regularly donated to anti-LGBTQ groups and has publicly made his views on these issues clear.

But the Chick-fil-As and Googles of this world don’t necessarily have to change. The line for chicken sandwiches or people looking for a job at the world’s biggest search engine don’t seem to be getting any shorter, at least for now. But as a generation of workers and consumers intent on supporting and being a part of organizations with a positive social profile becomes the majority, it’s only a matter of time before poor decision making around policy, hollow gestures of support and simply being on the wrong side of history catch up to even the biggest brands.