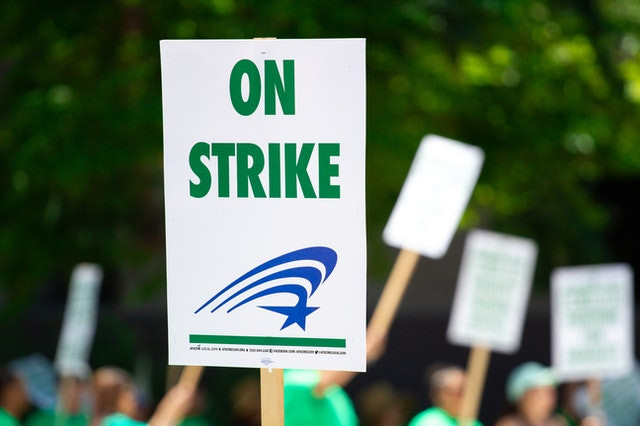 The American workplace has seen the diminished power of unions over the last few decades, a development that contributed to a loss of bargaining power for workers, a stagnant minimum wage and de-regulation of people practices. Not coincidentally, it’s all come during a period of the middle class fading away.

In the post-World War II years, when the middle class was its strongest, it’s often said that one in every three American workers belonged to a union. Today, that number barely reaches one-in-ten in the public sector and one-in-twenty in the private. The cost is real. As inflation has risen, wages haven’t followed, education is more expensive than ever and what you’re left with is entire generations of Americans that are laden with debt. Meanwhile, the wealth gap seems to only grow.

Unions were much maligned in decades gone by, known more for nepotism and corruption than collective bargaining agreements and worker representation in some circles. But perceptions have changed in recent years as workers have seen benefits weakened as profits increased for the organizations they worked for. It has resulted in a wave of people supporting unions in numbers that we haven’t seen in decades. Gallup estimates that 65% of all Americans approve of labor unions, while a 2018 study from MIT showed that 48% of all non-union workers said they would join one if given the option. That translates to around 58 million people.

The pandemic has only amplified the resurgence of support for unions, as the plight of essential workers during the crisis revealed what many see as a need for greater unionization of the American working class.

Unions can be troublesome when mismanaged or corruption sets in. That is, after all, why they spent the better part of the last 30 years in decline. But their deterioration has a price tag as well. In manufacturing and agricultural industries, immigrant workers’ rights and ability to assimilate into the country economically has been diminished.

Whether it’s equal pay for minorities in the workplace, more humane working conditions for immigrant workers and organizing worker voices to fight for benefits, pay and terms of employment, unions have a role to play to organizing people to influence decision makers and provide balance in a power struggle between executives and the workers that deliver an organization’s goods and services.

Corporations, like any other group of people, can be a mixed bag of good citizens and bad faith actors who are driven by greed rather than the greater good. With trust for government at an extreme low and individual bargaining power at a minimum for workers outside the knowledge economy, organizing via unions may be the only route forward for many people.

Industries such as hospitality, tourism and retail are relying on a big recovery post pandemic, but are having trouble keeping people in the low paying jobs they often offer. In the end, people are voting with their feet and moving into other industries or roles. If companies in those industries are going to acquire and maintain the workforces they need to not just recover, but thrive again, they may do well to collectively bargain with workers on terms that will make those jobs palatable to people who are beginning to value themselves differently in the wake of a crisis that highlighted just how important they are. That might just mean workers unionizing.

Are Unions Coming Back?

The fact is, the demonization of unions runs strong. It’s a message that pervades media and politics to this day and despite President Joe Biden’s support of unions, getting any kind of pro-labor action through Congress will still prove difficult despite a slim majority for Democrats. With the pandemic, healthcare reform, immigration, foreign policy issues and everything else that sits on the table for this administration to address, small wins for labor are more likely in the short term.

That could be through executive actions or supporting initiatives from the National Labor Relations Board (NLRB) or simply supporting the formation of some new unions. Recent months have seen Google workers form a 600 employee union, a first in Silicon Valley, and workers vote over the whether or not they wanted to unionize at an Amazon warehouse in Alabama.

The Alabama vote failed and could give key insight into why you won’t be seeing a full return of unions in the short term. Workers cited the risk of losing things like PTO and other benefits in bargaining when interviewed by Business Insider. Other workers had reservations over union fees and whether union leaders could actually prevent anyone from getting fired, all of which are valid concerns.

In some cases, bad previous experiences with unions played a role, with workers worried that work ethic was rendered meaningless and that unions would value seniority over anything else. Those criticisms matter. People like the idea of meritocracy, even if it doesn’t always play out in the fair ideal fashion it espouses. But the biggest obstacle facing the reformation of unions is the companies who employ workers.

Many will dump resources into ensuring unions don’t return. Amazon touted its $15 minimum wage, healthcare from day one and other benefits as a reason to not let a union change the structure of the labor agreement. And it worked.

Other companies in knowledge fields may very well do the same or merely allow employees to unionize in a way that has no real substance. For example, the Google employees union has no ability to force the company to bargain over pay and benefits. Rather, its focus is to “examine Google’s role in society and help reshape the company’s culture,” according to an article from NPR.

In the end, unions have a long way to go and there is still much employers can do keep them from happening or convince workers to break from the idea of a union.

With politicians taking up typical union causes such as increasing the minimum wage, expanding healthcare benefits and making childcare more accessible, the need for a return of unions may not be there, but there again, people simply do not trust government to get it done for them. For now at least, unions don’t appear to be on the rise, but depending on how the next few years pan out when it comes to benefits, pay and the rights of working class people, the view around unions will continue to evolve.

The HR Guide to Layoffs
From Cashier to HR Manager: How One Immigrant Made It Happen
Transgender Surgery Ban in North Carolina Struck Down
10 HR Trends for 2023
Circle K to Pay 8 Million for Disability, Pregnancy and Retaliation Charges