​Don Wen sometimes wonders whether new clients and colleagues are conjuring up the typical stereotypes when they see he is of Asian descent. He imagines they might be curious about whether he speaks with an accent or might worry that he is too rigid. Perhaps they are concerned that he is too data-driven and lacks agility.

“Do I think I have more to prove? Yes,” Wen says. “But I think I surprise people.”

As a partner at PwC, Wen is a member of the corporate elite—a rarity for most minorities. What’s unique about Asian-Americans is that they are well-represented in the workforce yet woefully underrepresented in the corridors of corporate power. They hit what author Jane Hyun dubbed a “bamboo ceiling,” just as women are said to be blocked by a glass one. The myth that Asian-Americans are the “model minority”—hardworking people who don’t need help—has blunted their progress. But now, amid surging violence and companies’ promises to increase diversity, Asian-Americans are frustrated by their lack of advancement and employers’ seeming indifference to their situation.

“A lot of different organizations are hiring their first diversity officer ever, and we have been told by clients, ‘We want someone Black or brown only,’ ” says Debbie Tang, a partner at Bridge Partners, a New York City-based executive search firm specializing in finding candidates from diverse groups for leadership roles. “That’s what people think of when they think of diversity. It’s hard to get them to understand that Asians are a minority.” 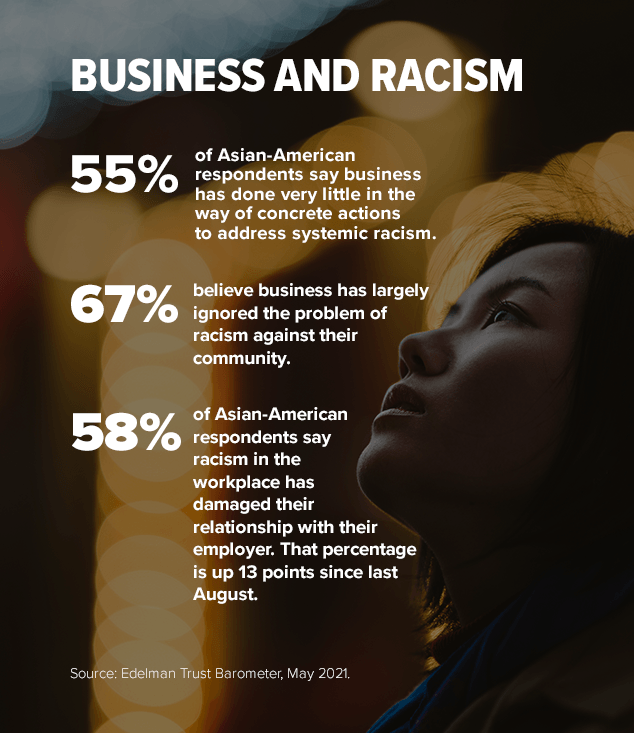 Efforts to understand the Asian-American experience are growing as violence against Asian-Americans surges, with many blaming former President Donald Trump and his administration for triggering the attacks by referring to COVID-19 as the “kung flu” and “China virus.” Anti-Asian hate crimes rose 164 percent to 95 incidents in 16 of the country’s largest cities and counties during the first quarter of this year compared with the same period in 2000, according to the Center for the Study of Hate and Extremism at California State University, San Bernardino. Last year, Anti-Asian hate crimes surged 146 percent.

The anger, which reached a boiling point in March after the killing of six women of Asian descent during a mass shooting in Atlanta, has sparked unparalleled activism in the community that goes beyond protests and petitions. In May, prominent Asian-American business executives, including Sheila Lirio Marcelo, the founder of Care.com, and Jerry Yang, a co-founder of Yahoo!, pledged $125 million to start a new nonprofit, the Asian American Foundation, to increase the community’s influence and economic status.

Earlier, a coalition of Asian-American business leaders, including Zoom CEO Eric Yuan and OpenTable CEO Debby Soo, bought a full-page ad in
The Wall StreetJournal to condemn the brutality and pledged $10 million to fight it. “We are tired of being treated as less than American, subject to harassment and now, every day, we read about another member of our community being physically attacked—simply for being Asian,” they wrote.

Politicians are paying attention. In May, President Joe Biden signed the COVID-19 Hate Crimes Act, which is designed to combat attacks against Asian-Americas by raising awareness and expediting review of potential hate crimes at all levels of government. This followed other initiatives, including the appointment of a deputy assistant to the president who will serve as liaison to the Asian-American and Pacific Islander community. (There are 24 million people in the U.S. who are of full or partial Asian heritage. That’s equal to 7 percent of the population, though less than 2 million of them are Pacific Islanders, according to the U.S. Census Bureau.)

The question now is whether corporate America will do its part. Leaders behind
TheWall Street Journal ad promised to redefine “Asian-Americans as a group worth representation at all levels of the organization” as part of their pledge to issue diversity reports. But change has been slow in coming.

Society for Human Resource Management (SHRM) research found that over the last year, 17 percent of Asian workers felt they were unfairly treated because of their race or ethnicity. That’s essentially tied with Hispanic/Latino employees but half the percentage of Black workers who said the same. Among S&P 500 companies, there are 29 CEOs of Asian descent (5.8 percent), and 25 of them are male, according to MyLogIQ, a data provider of public company intelligence.

Those statistics belie the long-held myth that Asians are the “model minority” who universally succeed and have either overcome or don’t experience any discrimination. Of course, there are numerous Asian-Americans among those who have reached the highest levels of power.

Most recently, Kamala Harris, a woman of South Asian descent, was elected U.S. vice president. Indian-American Sundar Pichai is CEO of Alphabet and its subsidiary Google; Microsoft CEO Satya Nadella is also Indian-American. And while many Indian- and Chinese-Americans have prospered in the U.S, people from other Asian countries, such as Burma and Mongolia, are more likely to be struggling.

“We see a lot of Asians that are already successful [in business], unlike the perception of other communities of color,” says Anna Mok, president of Ascend. “Companies aren’t doing all the work needed to help Asians advance [because of that perception].”

The model minority label stems from a
New York Times article published during the 1960s by a sociologist who lavished praise on Japanese-Americans for overcoming the prejudice and internment they faced during World War II and disparaged the Black community for “failing to thrive.” Americans of Japanese descent were praised for their respect for authority, academic excellence and “subordination of the individual to the group.”

Over the years, that adulation morphed into a stereotype by which all Asians were painted as hardworking, smart and faithful, say diversity experts. However, they were also deemed workers who lacked the ambition, creativity and confidence that leadership requires.

Some first-generation Asian-Americans say there are nuggets of truth to the cliché. “I was taught and wired to respect hierarchy. It has hurt me so much,” says a Chinese-American consultant who requested anonymity. “In Asian culture, there is humongous respect for your elders.”

She says that mindset kept her from quickly quitting a job with an abusive boss. Volunteer work on committees to promote gender and ethnic diversity didn’t help her career because such activities didn’t lead to billable hours. After realizing her efforts weren’t changing the makeup of the all-white male leadership at the consulting firm where she worked, she eventually left.

Wen says, “My mother told me never to brag. But in corporate America, you have to talk about your accomplishments.”

Over the years, Wen says, he has taken advantage of programs PwC offers in public speaking and delivering effective presentations. He says they helped him and that he feels supported by his colleagues. Still, he says, he’d like to see companies understand that “not everyone talks about their accomplishments or performances in a similar way. We have to be more sensitive culturally when we are coaching and managing.”

Many companies are trying to expand the idea of what skills and characteristics make a good manager, though they are still fighting against a long-ingrained belief that traits such as aggression and competitiveness, adjectives typically associated with alpha males, are necessary for good leaders. All minority groups would benefit from broader definitions that would allow for more respect of cultural differences.

“The onus is placed on us to have to adapt when the culture is white male,” says Jennifer Sun, co-executive director of Asian Americans for Equality, a New York City-based nonprofit. 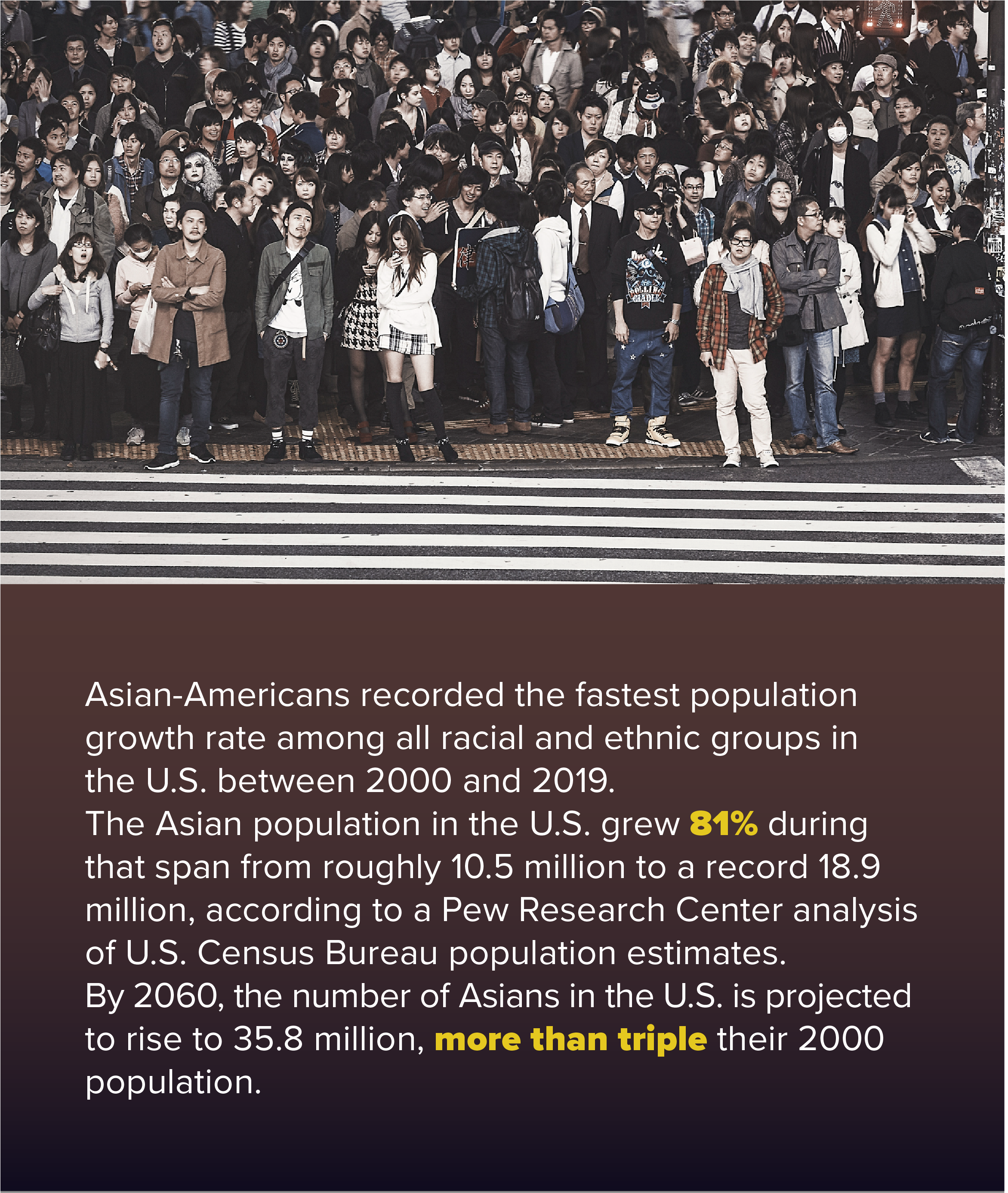 Asian-Americans have immigrated to the U.S. from more than 20 countries in three different regions over many decades. Their education and income levels vary widely. Overall, 54 percent of Asian adults ages 25 and over have bachelor’s degrees or higher, compared with 33 percent of both total immigrants and U.S.-born adults, according to Migration Policy Institute, a Washington, D.C.-based nonprofit.

However, while 79 percent of those from India are college graduates, less than one-quarter of Cambodians or Laotians have degrees. The median income for an Indian family was $119,000 in 2019 but only $44,000 for a Burmese family, according to Pew Research Center, a Washington, D.C.-based think tank. And while 6 percent of Indian families in the U.S. live in poverty, that number jumps to 25 percent for Mongolian families.

Immigrants from India have advantages that other groups don’t, experts say. Many Indians already speak English and have a familiarity with Western culture, which experts attribute to India’s history as a British colony.

Having Asian-Americans in a company’s leadership may help pave the way for more Asians to reach executive positions. Debra McCowan, senior vice president and chief human resources officer for NetApp, says that over the course of her two decades-plus career, she had heard the negative stereotypes about Asian Americans lacking leadership skills. Those didn’t exist at the Sunnyvale, Calif.-based tech company where McCowan has worked for two years, and she thinks it’s because NetApp’s CEO of seven years, George Kurian, is Indian American.  McCowan says that 23 percent of the company’s employees are of Asian descent and they make up 20 percent of upper management’s ranks.

Asian leadership is not always a boost, however. Earlier this year, Google reached an agreement to pay $3.8 million to settle allegations of systematic compensation and hiring discrimination against women and Asians. More than 5,500 employees and job applicants were eligible for payments under the agreement with the U.S. Department of Labor.

“I think for our organization it is important [to divide Asians into groups],” she says. “We have observed certain patterns. I think there is a difference in what is needed.”

For example, Prabhakar says, there is a stereotype that East Asians are passive. “In style, they don’t tend to talk over other people,” she explains. She wants managers to understand that and proactively encourage them to speak in meetings or hold sessions with them individually to hear their ideas.

Overall, Prabhakar wants managers to provide Asian employees the chance to be given high-profile work that will expose them to senior executives, which will help advance their careers. She fears Asians’ reputation for being excellent workers can relegate them to roles that limit their visibility.

Meanwhile, Black employees represent nearly 7 percent of the total workforce, while Hispanic employees account for 2 percent. Increasing those numbers is a major priority for Deloitte’s diversity, equity and inclusion program.

“The difference here right now is there are marginalized communities that [figuratively speaking] have a greater distance to travel,” Prabhakar says.

But she’s confident that Asian-Americans will rise to greater heights in corporate America. “There is still work to be done,” Prabhakar says. “Asians are rallying better than they have before. The collective voice is definitely coming out in a positive way.”

Theresa Agovino is the workplace editor for SHRM.

New legislation seeks to address the rise in hate crimes committed against Asian-Americans and Pacific Islanders (AAPIs), but experts insist that more needs to be done to combat anti-AAPI discrimination, especially in the workplace.

Viewpoint: Make This Checklist Your DE&I Launching Point
Diversity, equity and inclusion (DE&I) is a critical part of any organization’s business strategy. McKinsey and other consulting firms, as well as myriad business schools, have confirmed that organizations with diverse boards, leadership teams and workforces outperform companies with more homogeneous populations.

Are You Keeping Your DE&I Commitments?
In the wake of protests and social unrest in 2020, organizations ramped up their commitments to focus on diversity, equity and inclusion. A year later, what changes have been made, and what work continues?