​Baby Boomers retiring at unprecedented rates and the Great Resignation of other workers—including many in health care and high-tech positions—are adding to hiring headaches for employers looking for qualified candidates to fill jobs.

Recent research from the Society for Human Resource Management (SHRM) and the SHRM Foundation found that people in the U.S. embrace the idea of second chances and would be proud to work for an employer—and would patronize businesses—that hire people who have a criminal record or have been incarcerated.

Among the findings of the survey conducted with 1,102 workers in April 2021: 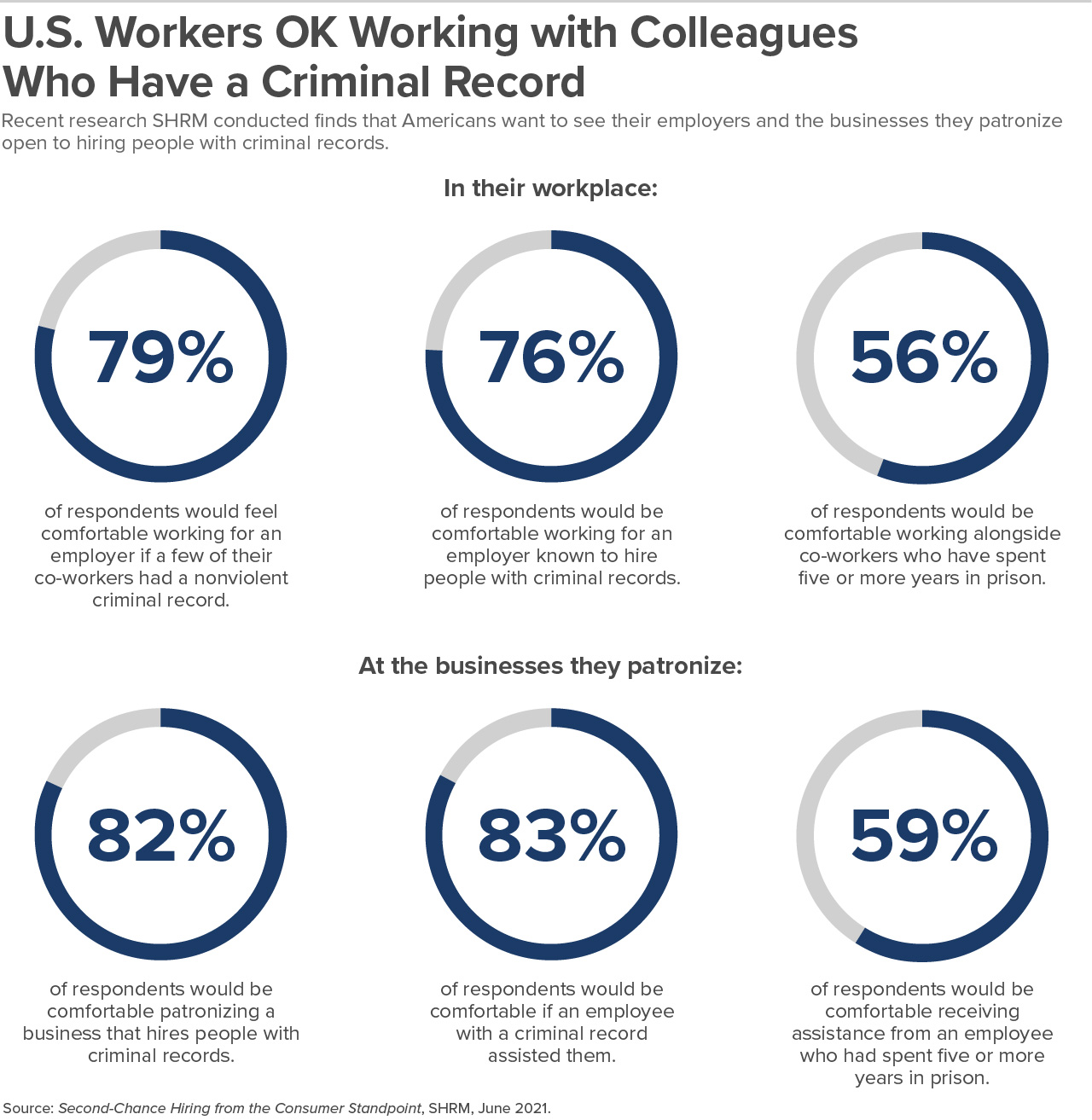 “Nearly 700,000 people are released from prison each year but too often they are denied the opportunity to put their skills to work due to deeply rooted biases and harmful misperceptions,” said Johnny C. Taylor, Jr., SHRM-SCP, SHRM president and chief executive officer, in commentary that appeared on LinkedIn.

[SHRM members-only resource: Getting Talent Back to Work digital toolkit]

“Organizations that are unwilling to hire the formerly incarcerated are missing out on a variety of benefits,” Taylor added, including an inclusive and diverse workforce, stronger communities, and a chance to demonstrate that they’re good corporate citizens.

What Employers Can Do

President Joe Biden proclaimed April as Second Chance Month to help people with criminal backgrounds successfully re-enter society. He called on employers and others to remove barriers that prevent people with criminal histories from getting jobs and to implement quality job training during incarceration.

One obstacle is job applications that ask applicants if they have a criminal record. New federal legislation introduced in March would encourage states to implement “ban-the-box” policies that prohibit employers from asking about criminal history before making a job offer. Thirty-six states and Washington, D.C., have policies banning the box, according to the National Employment Law Project.

For employers looking to hire people with criminal records, “the population is already in plain sight—1 in 3 Americans have some kind of record which may be a barrier [to employment],” said Elizabeth Speck, principal at MindOpen Learning Strategies LLC.

She will be among panelists discussing “Talent Outside the Box: Fair Chance Leadership Lessons” during SHRM’s Talent Conference & Expo on Aug. 25 in Las Vegas.

A disproportionate number of those who are incarcerated are Black and brown Americans, and the term “fair chance” hiring specifically addresses structural racism and how people with criminal backgrounds “are deliberately devalued and marginalized” from seeking job opportunities, Speck said.

[Want to learn more? Join us at the SHRM Annual Conference & Expo 2021, taking place Sept. 9-12 in Las Vegas and virtually.]

“Have a [hiring] strategy. … See it as part of your DE&I [diversity, equity and inclusion] picture” instead of merely a compliance issue, Speck said. She offered the following suggestions:*Connect with local re-entry organizations and probation and parole departments. They can train people for the skills an employer needs and help with job placement.

“If you give someone with a criminal record a good [application] experience, even if you don’t hire them, if you’re humane, you have empathy, that will get around,” Speck said.

Employers looking to expand their hiring search should consider job fairs, said Tarik Greene.
He is co-founder and co-executive director of M.A.D.E. Transitional Services in Haverstraw, N.Y., where he oversees the development of transitional services programs and partnerships. He will join Speck on the SHRM panel.

“For so many years, employers have been throwing away applications once [job seekers] have marked that box” indicating they were formerly incarcerated. In many cases, though, their criminal background has nothing to do with the job they are seeking, Greene said.

They may have obtained their undergraduate or master’s degree while incarcerated, or became licensed plumbers, electricians, floorers or barbers. They may have developed culinary skills or rose to a supervisory position.

“The one thing employers should not do,” he cautioned, “is approach [fair-chance hiring] from a standpoint of feeling sorry for this prospective employee. It’s not about feeling sorry; it is about your company and your company’s bottom line, and the best fit for your particular company.”

Viewpoint: Holiday Advice from a Jewish Guy Who Wears a Chai
Are Shorter Workweeks Good for Business?
7 Ways to Show Gratitude for Employee Engagement