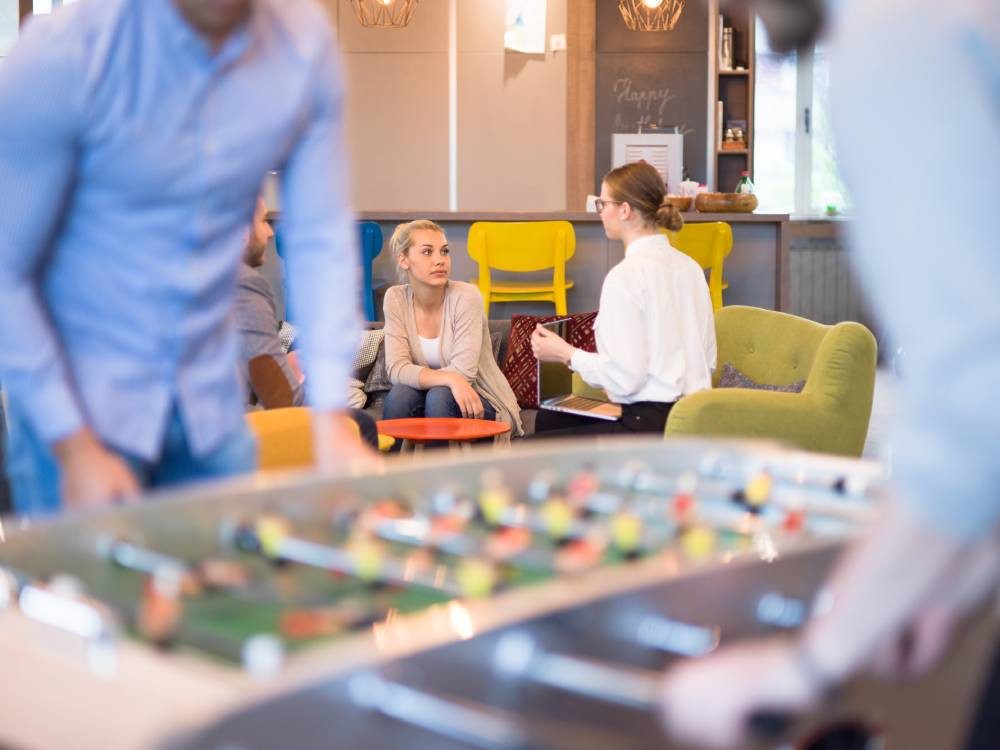 As the war for talent heated up during the 2010s, companies searched for creative ways to entice employees to join their workforces and hopefully stay for the long term. The truth is it didn’t work. The games and gimmicks often furthered generational divides as older workers felt the office had been transformed into something more akin to a playground. The floorplans, meanwhile, increased anxiety levels and the employees eventually grew sick of perks they couldn’t actually apply to adult life and moved on to the next opportunity.

Around and around we went with companies big and small jumping on the bandwagon of investing in fluffy, meaningless perks that did little to actually improve the lives or skills of their employees and offered little business value beyond some social media posts about culture. Retention, meanwhile, was never addressed as the workers the perks were targeting to please continued to move around steadily in search of better opportunity.

Or at least, that’s what many seem to believe about younger workers these days. There is little data to show the impact of these perks, but as a recent study from Kansas State University and the University of Mississippi’s Novak Leadership Institute notes, younger workers biggest concern relates to how they are treated by their managers. In particular, they highlighted two types of respect:

As the reality of COVID-19 settled in and office spaces sat abandoned with employees working productively in the comfort of their homes, there was no group of people that fluffy perks became less meaningful to than the people they were supposedly designed to please; employees themselves. And for HR, those little perks were suddenly nothing to brag about. Ping pong and beer taps just don’t resonate with an employee population struggling with anxiety, isolation and in some cases, the loss of loved ones.

As Gen Z becomes a bigger part of the workforce, they’ve made it clear that they expect to be compensated for their talent and they want employers to respect their wellbeing. Perhaps that’s because they saw what unfolded over the last decade and refuse to be fooled the way their predecessors in Gen Y were.

The youngest Millennial is now roughly 26-years of age. They aren’t kids anymore and they know it. The older members of this generation watched the office perk fad come and go and many are happy to see the back of it as the realities of life with a mortgage, kids and healthcare needs beckon, if it isn’t already upon them. Hindsight is 20/20, but many now see the games for what they were, the illusion of meeting their demands without actually investing anything in them.

Employers figured out that they could become a central tenet in this generation’s lives and in doing so, demand more from them without providing remuneration or costly benefits related to mental health and holistic wellbeing. All they had to do was make the workplace feel like a day at camp.

Food, some time to play games and a place to sleep. Gen Y, a group that entered the workforce amidst the greatest economic downturn since the depression, could enjoy its childhood just a little longer under the guise it was making its way in the world.

But it wasn’t. Ask many members of this generation how they view that time in their lives and you’ll get a sense they were spinning their wheels. They replaced their parents’ houses and dorm rooms with office spaces they barely had to leave. Some rented apartments in run down neighborhoods knowing they’d barely live there and it would leave a bit of cash for the thing they wanted most: life experiences.

READ: The Great Resignation: Is It Real and What’s Next?

Some got the experiences they sought out, others were too busy servicing the absurd levels of debt they’d accrued to get to that point. When it came to the Millennial work experience, however, a fair amount of them were unfulfilling at best, just plain bad at the worst, despite the gourmet coffee and snack bar. It turns out there’s more to a satisfying work experience than the quality of the break room in the same way more there’s more to being happy in life than the sun simply rising.

In one sense, the pandemic has been a blessing as it made this clearer than ever. It has also highlighted the individual needs of workers instead of lumping us all together in a generational mass as if we all want, need or experience the same things. If nothing else, it has humanized all of us and hopefully, in the process, made employers more focused on the things that make us human; our wellbeing, our abilities and our desires.

As employers go forward, they’ll do well to keep this in focus. Employees who feel their personal boundaries are respected and their position is valued, fairly compensated and moving in a direction rather than dangling close to the cliff edge come the next economic crisis, are going to be more productive, invested in company goals and likely to stick around. Check all those boxes and what you’ll find is an employee population that is happy to sleep at home and leave the ping pong for happy hour.

In the interest of full transparency, the words you read right now are written by a Millennial. I am toward the older end of that spectrum, but a Millennial nonetheless. My experience is the one you often hear about. Having graduated just weeks before New Year’s Day 2008, I had no idea what would await when I exited the halls of the university that helped shape the professional I would become. Or more properly put, the lack of what would await me.

Looking for a job in 2008 that wasn’t in the service industry or retail often felt like searching for the existence of an underground city. You’d heard that other people had supposedly found it, but where was the entrance? You did the internships, worked at the lowest levels you possibly could for extended periods of time and yet, no doors seem to open.

It took years of hustling multiple jobs, some in my field, some not, just to make ends meet. Years of student debt went unpaid as the consumer variety was accrued and as the years went by, it all felt a bit hopeless at times. It would take into my 30s to find a job that would help me establish a real career path and provide a foundation one could build a life off of. When I got there, everything I did or was a part of felt like I was making up for lost time.

Meanwhile, if you turned on your computer and scrolled down a social media feed, it took just a matter of seconds to see an article about how Millennials were everything that was wrong the world. It was often said we were entitled or needy for wanting to feel valued or included in the workplace. That we had to be coddled or even incentivized and patted on the back to do basic tasks.

The criticism didn’t match the reality around me though. I looked around and saw a lot of talented young people working just as hard as their older counterparts. For their efforts, they were often rewarded with pats on the head from patronizing managers who told them to be grateful for the work. As if a charity had been provided and we were all just unqualified children who were lucky to be there.

Ironically, many of those same managers are on my feeds today talking about ageism as a younger generation with the digital skillset that so many companies need is seeing their demands met.

Like so many other things in life, the answer to the question of how companies lure talent and keep them invested in spending hours of their lives to commute to offices lies somewhere in the middle.

As you look to covet a new generation that isn’t mesmerized by games or beer taps, you’ll have to hone in on what they do value. You’ll have to do the same for each employee, regardless of age, to get the most out of them and increase the odds you might actually retain them. As for the perks, you shouldn’t necessarily sell that $2,000 coffee machine just yet (people do like it), it might be a good idea to stop filing it under the ‘benefits of working here’ category.

From Cashier to HR Manager: How One Immigrant Made It Happen
New Zealand’s Employment Court Mandates Fortnightly Rate
How to Help Women Lead the Workplace Authentically
What Will HR Look Like in 2030?
8 HR Trends to Ponder Ahead of 2023