They have been preparing for an exit for some time. According to LendingTree, 50 percent of Millennials have a second income stream. For some, it’s a financial necessity; for others, it’s a pathway out of corporate America. The latter can pose a problem for companies as they also deal with large numbers of Baby Boomers retiring, so businesses continue to search for ways to attract and retain Millennials.

Not all companies are hitting the mark. Jeffery Shipwash says his employer dismissed survey results that showed people wanted to work at least part time from home after the pandemic. “It was completely ignored,” says the 28-year-old, who is a finance officer for the Department of Energy, though he works for a contractor he prefers not to name. “You just have no power at work.”

Last year, Shipwash started a company that flips houses; eventually, he hopes to make this his full-time job. It’s not exactly what the resident of Kingston, Tenn., envisioned when he graduated from college. His father and grandfather stressed the importance of getting and keeping a good, steady job. But during the lockdown, he realized he was putting his relationships with family and friends on the back burner as he chased the next promotion.

“I was always so career-focused,” Shipwash says. “As soon as I got to one step, I was automatically thinking about the next one. It’s not about money anymore. When COVID hit, it really made me change what I viewed as important.” 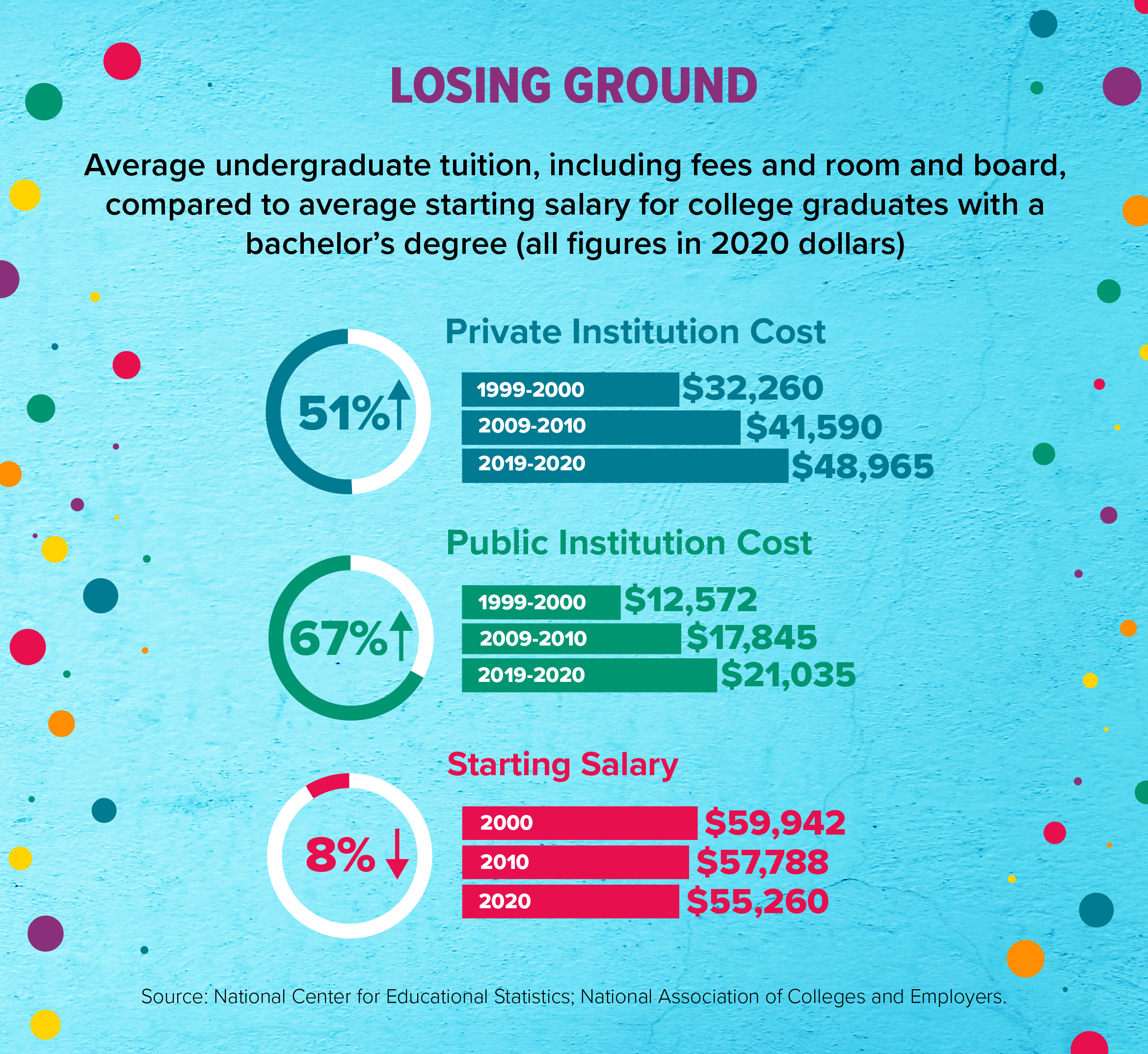 Will Sealy also started his own firm. In 2017, the 34-year-old co-founded Summer, which provides various services to employers to help their workers pay off student debt. “It was so eye-opening to see so many of my classmates struggling with it,” says Sealy, who is delaying marriage until he can pay off more of his debt, which is down to $20,000 from $65,000. He says the typical Millennial has $40,000 in student debt, which requires a payment of $500 a month.

One of Summer’s offerings is creating programs that allow employers to pay back some of their workers’ student loans. Assistance with student debt has become a popular perk in general, with companies such as Aetna, Fidelity and Abbott Laboratories offering it as part of their benefits packages.

The debt is a drag on Millennials’ lives, affecting everything from their credit scores to where they can afford to get a job. Big cities might offer better salaries, but borrowers may not be able to afford the rent and still make their loan payments.

Sealy says Millennials’ debt has made them wary of promises by institutions. Teachers and counselors told them going to college would lead to higher-paying jobs and encouraged high school seniors who probably had never taken a personal finance course to seek loans they didn’t really understand. “It was like Monopoly money,” Sealy says.

He and his classmates graduated during the Great Recession, and many struggled to find jobs. “I feel like we were misled into thinking that it was all going to work out and be fine,” Sealy says.

The combination of the recession and slow wage growth put older Millennials—those born in the 1980s—in danger of becoming a “lost generation” when it came to wealth accumulation, according to a study published in 2018 by the Federal Reserve Bank of St. Louis. The research, which looked at data from 1989 to 2016, showed that Millennials’ wealth accumulation was 34 percent below where it should have been based on data from older generations. However, they started to claw their way back as the economy recovered and are now only 11 percent behind, according to a 2021 report.

Diversity has been a hot-button issue in the wake of last year’s protests against social injustice. Millennials’ concerns go back further. A 2018 survey by Deloitte found that Millennials and members of Generation Z said diversity was key to workplace loyalty, with 69 percent agreeing that they would stay at an employer for five years or more if they perceived the workplace was diverse.

Deloitte’s research also found that 56 percent of Millennials see systemic racism as very or fairly widespread in society, and more than half see older generations as standing in the way of progress.

Millennials are now the most diverse adult generation in history, according to the Brookings Institution, a Washington, D.C.-based think tank. Generation Z is more diverse, but the oldest members of that generation are 24 this year and don’t yet make up a significant part of the workforce.

Some suggest that Millennials’ diversity will naturally smooth the path to a more inclusive workplace. It’s too soon to say if that will be true as Millennials push further into management, but Millennial-founded companies such as Facebook and Lyft have been criticized for their lack of diversity. Only 8 percent of Lyft’s employees are Black, while 9 percent are Hispanic. Black and Hispanic workers each account for 4 percent of Facebook’s employees.

Millennials of color don’t buy that generational heterogeneity alone will result in more-diverse workplaces. They have faced too much discrimination at work to believe that.

“Diversity has to be intentional,” says Alex Tremble, chief culture officer at the American Conservation Experience, a nonprofit that recruits and trains volunteers for restoration projects on U.S. public lands. “This doesn’t just happen.”

Earlier in his career, Tremble found out his supervisor at the U.S. Department of the Interior’s Office of the Secretary was referring to him as her “little Black boy.” He says he sued the department for creating a hostile workplace and won. (A spokesperson for the department had no comment.) Yet he wound up leaving and went on to a career that included seven years with the National Park Service, a bureau within the Interior Department. Along the way, the 36-year-old started his own coaching business and a podcast called the Alex Tremble Show. Earlier this year, he left the Park Service because government conflict-of-interest laws were making it too difficult to hold the job while running his business.

Tremble says part of the allure of his new post at the American Conservation Experience is the ability to diversify what he says is a largely homogeneous environmental sector. He notes that many companies have hired chief diversity officers lately, though he calls a lot of the efforts “fluff” due to these individuals’ lack of power and influence with management.

Tremble says he reports to the CEO, and that’s critical to making changes. He’s currently contemplating how to improve diversity within the organization. Though he still isn’t sure what programs he wants to institute, he knows “we need to think about this differently.”

The Power of Voice

Showing Millennials that their ideas are valued is key to keeping them.

At a town hall meeting during the pandemic with the CEO of Henry Schein Inc., some Millennial employees raised concerns about how dealing with COVID-19 was affecting individuals’ mental health. A mental health committee was formed as a result, and the company added new tools such as webinars to help employees cope with stress.

“That was an important initiative, and not just for Millennials,” says Seema Bhansali, executive director, corporate affairs, and co-lead of diversity and inclusion at the maker of medical supplies and equipment. “They were the ones to stand up and say, ‘This matters to me’ in a way that I, as a Gen Xer, never would have done.”

Over the years, Henry Schein has added other benefits to retain its Millennial workers, such as paying up to $5,000 in adoption benefits and providing four weeks of paid parental leave. Additionally, the education allowance has been raised to $5,000 from $3,500, and plans are underway to create a permanently hybrid workforce.

Fisenne says the company has been identifying skills gaps in the workplace as it discusses career aspirations with team members. “We want to synthesize these,” she explains. “We just don’t want to throw classes out there.”

Deciding how much effort to put into training Millennials is tricky, RainmakerThinking’s Tulgan says, because “development is an investment paradox. You have to develop people because that’s what they want.” However, the training also makes them more attractive to competitors, he adds, so “you have to calibrate your investment and identify high-performers who are more likely to stay—[and] plan to help them stay longer.”

Some Millennials, longing for purposeful jobs, change careers rather than just positions. Amit Paley is on his third career, and no one is more surprised about it than he is. The 39-year-old says he had wanted to be a journalist since he was a kid and was thrilled when he landed a job at
The Washington Post.

“I thought I would never leave,” Paley says. But after covering the Iraq War and the Great Recession, Paley was burned out and opted to attend business school. He then became a consultant at McKinsey & Co., where he was a leader in the consulting firm’s LGBTQ resource group. He also volunteered at the Trevor Project, a suicide prevention and crisis intervention organization for LGBTQ youth.

Paley says he grew up in a liberal, accepting family, yet he still struggled with his sexuality. That led him to think about the conflicts endured by those without strong foundations.

After Donald Trump’s election, calls to the Trevor Project’s suicide hotline surged because of the former president’s rhetoric and policies around the LGBTQ community.

“It made me think about what gave my life meaning and purpose,” Paley says. No longer content to only volunteer, Paley became the Trevor Project’s CEO in 2017.

Theresa Agovino is the workplace editor for SHRM.

SHRM provides resources and information to help business leaders better understand the needs of Millennials—as well as those of other generations—in the workplace.


Generational Mindsets Affect the Workforce
Employees around the world may approach issues in different ways, depending on which generation they were born into. Their relationships with organizations and authority, as well as their work styles, can vary tremendously.


Toolkit: Managing Work/Life Fit: Dependent Care and Elder Care
Currently, many workers juggle both work and caregiving responsibilities. Those responsibilities extend not only to children but also to parents and other older family members. As the workforce matures, employees will increasingly become caregivers for their aging relatives.


Though Socially Conscious, Generation Z Remains Practical
Although members of Generation Z are perhaps more focused on social issues than any prior generation, they may also be among the most practical. New research has revealed that young Americans prioritize earnings above other factors when looking for work. But this emphasis on economic stability may be partially due to their perception that employers’ efforts to improve society have been lackluster.


Why Companies Should Engage with Millennials
Millennials can bring four key elements to the workplace: innovation and technological know-how, resourcefulness, social media awareness, and social and environmental consciousness.