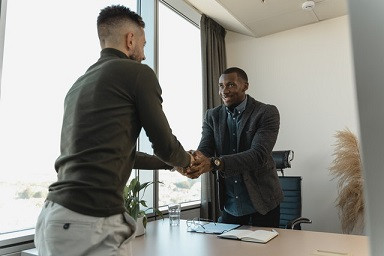 Improving the hiring process and putting an end to ghosting, which has become all too common in the pandemic, is an important step to winning the war for talent. The era of the Great Resignation is forcing Human Resources leaders to take a good, long look in the mirror and dissect practices and perceptions. The fact is that many recruits and employees have a negative view of HR.

Nearly 70% of respondents to a Zety survey of 926 employees across the United States said they didn’t believe that HR was on their side, according to Inc. Indeed reported that 77% of job seekers had been ghosted by employers. And 28% had ghosted the employer. This shows a lack of trust across the board.

That’s why changing the reputation of HR is going to separate the winners from the losers when this reshuffling is over. Paying attention to the conversations job seekers are having online and using common sense are great places to start. Here are some ways you can improve the hiring process:

Ghosting is a term used to describe when two people are dating and one of them suddenly and unexpectedly ignores the other. The person goes completely silent and never returns calls or messages, so that the other person understands that the relationship is over without anyone having to actually communicate or confront the issues that led to this demise.

This has carried over into Human Resources. Part of the problem is that hiring managers get so many resumes for a job opening that they can’t respond to them all. So, from the start, there are candidates who feel they have been ghosted or ignored. What’s much worse is ghosting someone with whom you have been interacting. In other words, don’t ghost someone if they didn’t get past the first or second interview. Give them a call or drop them a line to say that you’re moving in a different direction.

READ: How to Write Job Ads Fit for Recruiting Talent in the Labor Shortage

Now is not the time for bureaucracy or indecision. While you’re taking your time making a decision, another potential employer will be contacting the candidate with an offer. The waiting game has been a big complaint of job seekers for some time. But now that candidates have all the leverage, lengthy hiring processes are not going to cut it.

Ahead of the holidays, UPS shortened its hiring process to better compete in the tight labor market, according to KSNV in Las Vegas. The company needed to hire 100,000 seasonal workers to ensure packages were delivered on time. Reportedly, candidates could get an offer within 30 minutes of beginning the application process.

Ghosting is never an option, not even at the end of the interview process. You have to alert candidates that they have been rejected. Ky Cunningham, director of Corporate Recruiting at U.S. Xpress, Inc. and speaker at the HR Exchange Network Live Recruiting and Talent Acquisition online event, recently shared her organization’s move to let rejected candidates know that they’re not getting the job and letting them know why.

This helps improve the rejected candidate’s perception of the company, and it can go a long way to building a positive employer brand, especially on social media, she says. Her team has even provided referrals to strong rejected candidates as they sought jobs with other organizations.

READ: 4 Untapped Groups to Recruit During the Labor Shortage

One of the other big gripes job seekers have about the hiring process is that they never know what’s happening next. Employers seem to keep their process under wraps, which makes for more anxiety in what is already inherently a nerve-wracking process. Cunningham and her team heard this complaint and began explaining the steps candidates would have to take to get hired before the process formally started.

Transparency is about more than explaining process. It is also about informing the candidate about what the day-to-day will be like if hired. Being honest about working conditions, schedules, and the work that the candidate will be doing if hired is another form of transparency that is important. The more honest you are in the beginning, the more likely you are to have better retention down the road.

Have a Kind Heart

The next chapter in HR is going to be all about putting the human back into Human Resources. Having kindness and empathy is going to be necessary from the first time candidates interact with your organization, says Maria Leggett, director of Education at MHI and speaker at the HR Exchange Network Live HR and Future of Work online event.

Basically, no one should be treated like a number. Common courtesy should be the norm among your team and you. Of course, showing people you have respect and treating them with dignity, whether you hire them or reject them, will go a long way to improving the perception of HR. And Leggett suggests that leadership demonstrate these values to serve as models for others.

Ultimately, to get an edge with job applicants, employers are going to have to shorten the hiring process, become more transparent, show empathy, and connect and communicate better. Taking these steps will not only help HR attract top talent and grow a reputable employer brand, but it will also help change the negative perception people have of HR in general.

Photo by Tima Miroshnichenko for Pexels