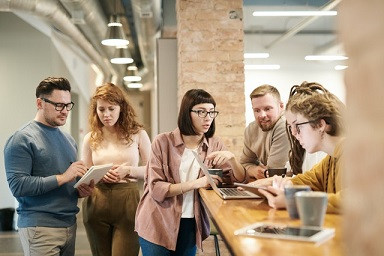 As the world enters the next phase of the pandemic, many are turning to creative solutions, such as acqui-hires or acquihires, for the talent shortage. Acqui-hires refers to a type of merger and acquisition in which a company purchases another organization for its employees.

In fact, the Wall Street Journal recently covered acqui-hires as a means to address the labor shortage and skills gap facing companies now that the future of work is knocking at their door. A shortage of informational technology (IT) workers has driven this increased interest in this type of M&A. In general, the same rules apply to an acqui-hire merger. The main difference is the company is purchased for its talent rather than its product or service.

This form of talent acquisition is nothing new for technology companies. Google, Facebook, and Apple have openly discussed their acqui-hire deals. In addition, the Federal Trade Commission opened an investigation into whether big tech companies were abusing this structure to eliminate competition and monopolize their industries. Still, they carry on and the practice has grown more common, especially in Asia-Pacific, particularly in India.

Skuid acquired InFlight Corp., which has developed a user-experience platform for human-resources software, to acquire its talent, according to WSJ. Companies are being forced to raise IT budgets and spending in response to the impact of COVID-19 on changing workplace and business models, said Jonathan Simnett, a director at Hampleton Partners, a London-based M&A advisory firm, in WSJ. He added that enterprise IT vendors are being driven to innovate to meet growing demand for new products, capabilities, and services.

These tech companies choose acqui-hires to quickly hire talent with skills they need and without having to negotiate in the same way they do with individuals who come to them through traditional job postings and recommendations. In addition, venture capitalists see these purchases, usually of smaller startups, as a success. Frankly, many of the founders are inventors who could create a nifty app but didn’t have the business know-how to run a company successfully, according to upcounsel.

READ: Is Your HR Team Ready for the Future of Work?

The structure of these kinds of M&A deals is a little different than the traditional ones.

“Structures can vary, but typically it’s an acquisition of stock or assets, with the bulk of the purchase price being held for employee packages. If the buyer only wants the team, they may sign a release agreement where the company agrees to release the buyer for hiring the employees and include a defensive license agreement of the company’s I.P.,” according to mondaq. “When it comes to pricing, buyers frequently express the price on a ‘per head’ basis, and the rate can be a few hundred thousand or $2 million per head.”

Human Resources leaders play a part in this from beginning to end. The increase in these M&As for talent acquisition align with the newfound respect that CHROs have earned in the wake of the pandemic. Employees of the purchased company are interviewed by the new owners. They are not guaranteed a position, but they do get some sort of financial gain. Those who do get hired obviously gain more money. Not all of the team members want to stay. Often, the founders of companies who get hired eventually leave. Some of them use the time working for the new owners to build their resume.

Once the deal is done and the new employees are integrated into the owner’s company, there is work to be done to ensure everyone engages and has positive experiences that result in positive outcomes.

“To obtain a positive return on investment, a buyer needs a target talent to remain with the buyer,” according to mondaq. “Structuring payments to target talent over time can motivate teams to stay in their seats and achieve results. Should payments be linked to the passage of time, the achievement of milestones, or have some incentives for each?”

Clearly, these questions about payments fall, in part, on HR leaders’ shoulders. They will be leading such discussions. There are other factors to consider about whether the buyer can convince talent to remain on the job. For instance, sometimes, the buyer’s business is located in another state and people are not always willing to move. Bonuses and help with finding a home might entice talent to move.

In general, Human Resources leaders are essential during any kind of merger and acquisition deal. SHRM has shared best practices. Ultimately, in an acqui-hire deal, HR has the utmost responsibility. First, it helps in determining which companies offer the right talent, strategy for the structure of the deal, and the integration of talent. More than 60% of acquirers said that cultural issues hampered the creation of value, according to a PwC report on M&As. That’s where HR leaders can step in. Obviously, the role of CHROs and their teams continue to grow.

Photo by fauxels from Pexels