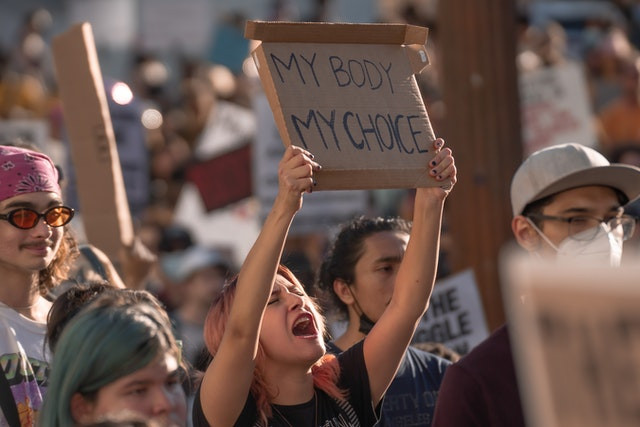 Women across the United States are reeling from the Supreme Court’s decision to overturn Roe v. Wade, which had essentially made abortions legal and gave women the fundamental right to choose what to do with their own bodies. Of course, there are some women, who see the recent reversal as a victory 50 years in the making.

That is why the question of whether employers should intervene to support women seeking abortions is a challenging one. Google has said it will help employees relocate to states where abortion is legal, and it is closing data loopholes to protect the privacy of women who visit abortion clinics, according to the Washington Post.

The majority of Americans wanted Roe v. Wade to remain the law of the land. In the wake of the decision and the anguish it brought to many, employers across the country vowed to support employees who wanted to seek abortions in states where they remained safe and legal. Dick’s Sporting Goods and Amazon promised to reimburse employees up to $4,000 to travel over state lines for abortions. Disney, Meta, Microsoft, and Levi Strauss are among employers who have said they want to add access to safe abortions to their list of benefits.

However, both Vox and NPR have recently filed news stories explaining that, in practice, employer-sponsored abortions would be nuanced and complicated. Many questions remain:

Some fear this kind of benefit would end up being for high-wage earners, who have access to a company’s full-range of benefits. In the wake of the decision, many experts pointed out that women of color and low-wage earners from states where abortions are illegal would be the most impacted by the ruling. Frankly, most women in professional fields would be able to afford out-of-state abortions anyway. Finding a way to support those women who need it most should be a priority, but it will require out-of-the-box thinking.

How Would Employers Deliver an Abortion Benefit?

The question remains if women would go through insurance, get directly reimbursed by their employer, or go through a service run by an organization like Planned Parenthood. Of course, the delivery could be something else entirely. These are just a few of the options that news outlets have offered as possibilities. There is no road map for this yet.

Going through insurance is possible, but this could be problematic in states where abortion is illegal. The insurance could have grounds for denying claims. The benefit of this delivery method, however, is women would still be making decisions with their doctors, and employers would not have to even know about their healthcare claims.

Direct reimbursement, on the other hand, forces women, who are already going through a difficult and traumatic process, to ask their bosses for both money and time off to get an abortion. There is no privacy. Some fear this could cause bias when it comes to the future of their employment.

Going through an organization like Planned Parenthood or another third party is another option. Again, there are still many questions about how this would actually work. This option, however, does provide privacy and access to care.

Would Women Use the Service?

Women, and especially women of color, already feel marginalized at work in many instances. Asking an employer for funds and time off for an out-of-state abortion might be too daunting. They could fear retribution in the form of layoffs or simply getting overlooked for promotions, which is already a problem. It is a private and personal matter that most people prefer to discuss with their close family, friends, and most importantly their doctor.

What’s the Legal Liability for Employers?

In some states, where abortion is illegal, government leaders are trying to find ways to prevent resident women from traveling out of state for the medical procedure. As a result, employers could potentially be held legally responsible if they fund an abortion. It could be seen as aiding and abetting.

Risk analysts at companies may end up seeing this benefit as too great a cost to the company. Larger companies, like the ones previously mentioned, may be able to afford the legal bills, but smaller ones likely would not. Therefore, some employers will refrain from offering this benefit because the risk is simply too great.

READ: How One Company Made DEI a Priority

Businesses need to make money. To do that, they have to convince people to purchase their goods or services. If they are headquartered in states, where abortion is illegal, they risk criticism, protests, and boycotts from the community. Some courageous employers will not care. Others will have no choice but to care if it threatens the livelihood of their business.

Frankly, this discussion will become null and void if a Republican Congress takes over next year as many are predicting. Some Republicans have already vowed to codify the ruling overturning Roe v. Wade, which would mean that abortions would be outlawed in every state. Democrats currently have a majority but in name only. Two Democrats – Senators Joe Manchin of West Virginia and Kirsten Sinema of Arizona – often vote with the Republicans. The Democrats simply do not have the votes to codify the original Roe v. Wade ruling.

When governments fail to act, businesses step in. Some experts in healthcare have warned that this is a dangerous practice. Already American healthcare is mightily tied to employment in the United States. This system adds big burdens on the shoulders of HR leaders, who now have to decide where they stand on abortion as part of their job.

Photo by Derek French for Pexels

Where To Invest in Recruiter Training Now
Guide to Self-Care for HR Professionals
What Is Rage Applying in HR?
5 Ways to Conquer Talent Acquisition Now
Black History Month: Go Beyond Ticking a Box