The Raleigh, N.C., resident has always been an hourly employee, and he says he’s never had a legitimate opportunity for upward mobility.

Washington has worked on the front lines at various restaurants and convenience stores since he was 16 years old. Now 47, he has been employed as a “do-everything” employee at a small convenience store for the past four years.

“It’s not always easy being almost 50 years old, not making much money and with a family to support,” Washington says. “But I try not to think about it too much.”

Washington’s plight mirrors that of many front-line employees. About 112 million workers, or 70 percent of the working population in the U.S., hold front-line jobs that involve tasks such as waiting tables, folding clothes or stocking shelves.

Washington didn’t envision this type of career when he was younger. In his 30s, he had dreams of owning his own business. He took night courses at a local community college and planned to earn, eventually, a bachelor’s in business administration. But when he and his girlfriend welcomed a baby girl, his priorities shifted. He gave up college and took on a second job stocking shelves at a big-box retailer to pay for diapers, formula and other expenses.

As he grew older, Washington wanted to progress in his career and better support his family. Specifically, he aspired to become a customer service manager who interacted with the public and mentored younger employees.

But despite a decadeslong history of showing up every day, working hard and even asking his managers for guidance on how to ascend professionally, he hasn’t been able to advance in the way he would like. “They always made false promises that if I kept working hard, I’d get promoted,” Washington says. “That never happened anywhere I worked. I think they were just telling me what I wanted to hear in the moment.”

He doesn’t think he has ever made $30,000 in a single year. That would require working at least 40 hours per week—which is never a guarantee when it comes to the type of work he does and many other front-line jobs.

Many front-line workers are members of low-income families. They are disproportionately women, people of color and older than 50. They often work long hours—or not enough hours—and struggle to progress in their careers.

However, research shows that upward economic mobility for front-line employees is a critical building block of an inclusive and resilient workforce. That means savvy business leaders reap benefits when they capitalize on ways to promote the advancement of front-line workers. 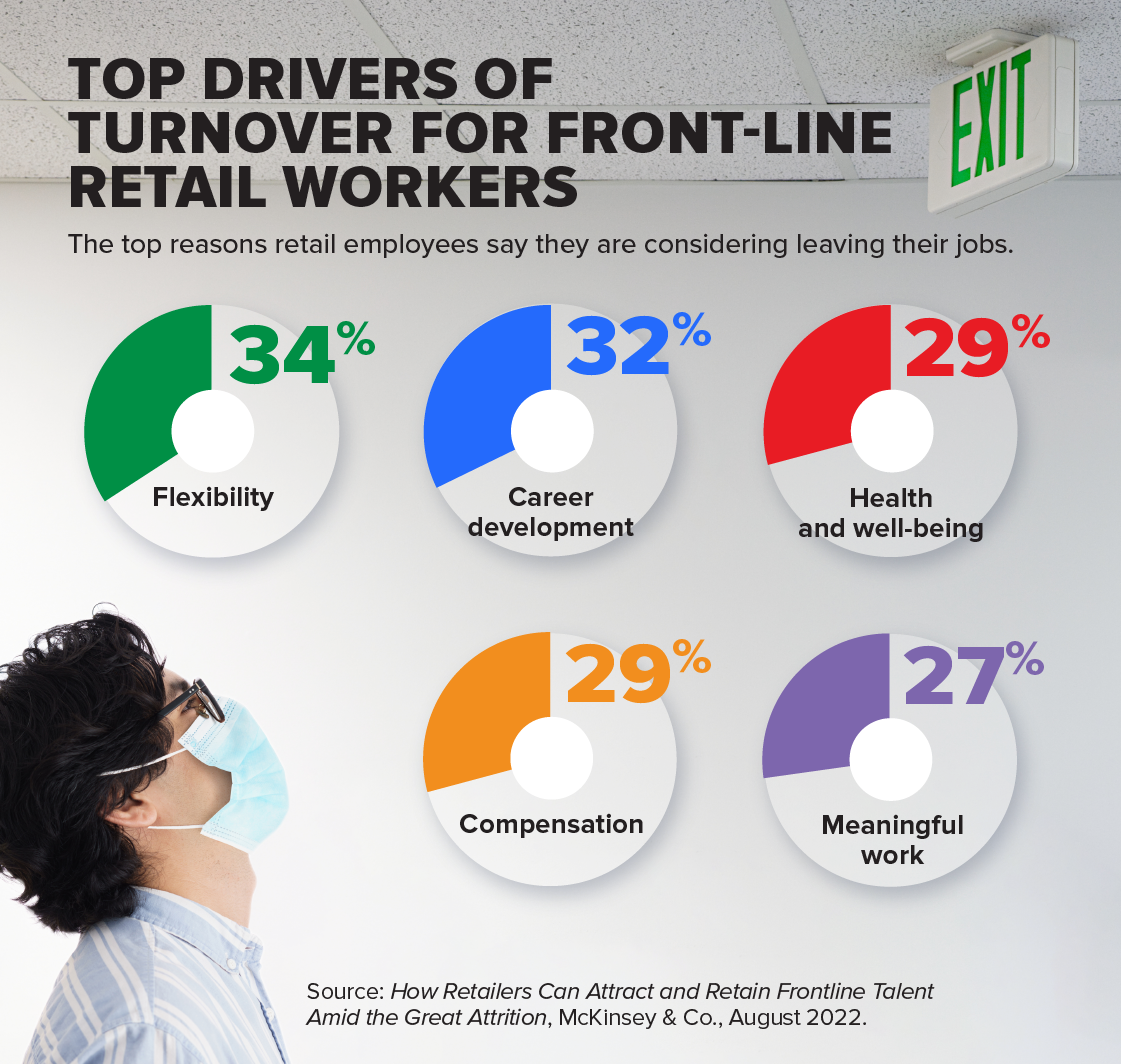 Life on the Front Lines

The obstacles that front-line workers commonly face have contributed to the Great Resignation, as members of this group have left their jobs in droves. For example, quit rates in the hospitality and retail sectors are twice that of the national average. And labor shortages have occurred in the public transportation sector, as burned-out transit workers have left for other occupations.

Burnout is common across industries with large numbers of front-line workers. For example, a 2022 Gallup poll found that more than 40 percent of K-12 workers in the U.S. say they “always” or “very often” feel burned out at work, outpacing all other workers nationally. Employees in government (33 percent), retail (32 percent), manufacturing (28 percent) and construction (22 percent) also exhibited high levels of burnout.

Megan, 27, has experienced burnout many times as an elementary school teacher.

At the height of the COVID-19 pandemic, she had been working as many as 16 hours a day. She taught young children, often accompanied by their guardians, over Zoom during the day and prepared lesson plans late into the night.

“I was getting maybe five hours of sleep each night, max,” says Megan, who requested that her last name be omitted. “I was moody, irritable and, for a while, I hated my job.”

She believes that school officials didn’t support teachers during the pandemic the way they should have. There was no plan in place for how to teach via videoconference, she says, and teachers had to figure out technical issues themselves.

“Nobody asked how we were doing, and, honestly, it’s still that way today,” Megan says.

“Teachers are already underpaid and overworked. When we burn out, it’s not only hard on us physically and mentally, but it also affects our overall morale and, to be honest, our motivation.”

Burnout can result in psychological issues, such as anxiety and depression, which can exacerbate personal and professional problems. Mental health issues can also stem from the following hallmarks of front-line positions:

Low wages. Many front-line workers, particularly those in the retail, hospitality and public transportation industries, barely make enough money to support themselves and their families. For example, a recent report by
U.S. News showed that customer service representatives made a median annual salary of just $35,830 in 2020.

No health insurance. Only half of all retail workers are eligible for employer-sponsored health insurance or paid sick leave, the U.S. News report showed. This situation has contributed to a high level of stress and burnout among workers in front-line jobs.

Little paid time off. Some companies don’t offer paid time off for part-time employees, who account for a large chunk of front-line employees in food services and retail. If they take a day off because they are ill, need to care for a family member or want to go on vacation, they often aren’t paid.

As front-line workers continue to jump to new employers, many businesses are trying to figure out why. A number of employers have raised wages for these workers by 7 percent to 10 percent since the pandemic began, according to the U.S. Bureau of Labor Statistics. They’ve also offered sign-on bonuses and other incentives to attract and retain talent. It hasn’t worked very well, though; employers are still struggling to recruit and retain front-line workers.

“Many brands are surprised to learn that pay is rarely a top turnover driver,” says Dan Johnston, CEO of software company WorkStep in Portland, Ore. Company leadership “assumes hourly employees clock in, clock out, cash their paychecks and don’t spend much time thinking about work beyond their shift. This assumption is wrong.”

In 2021, WorkStep conducted a survey of more than 18,000 front-line employees in supply-chain jobs across 150 companies to better understand what these workers want. The results indicated that a lack of career growth was the top reason for turnover.

“The top obstacle supply-chain workers face when trying to progress in their careers is lack of opportunity,” Johnston says. “Limited professional development opportunities, training, onboarding and chances to provide feedback all hinder a worker’s ability to progress and grow.”

Some companies have set up programs to support front-line workers’ careers.

Manufacturing USA, a network of regional institutes that specializes in technology, sponsors online workplace development initiatives that equip front-line associates in manufacturing with skills needed to support their careers.

‘I think CEOs in general need to really listen to what front-line workers say, particularly about their day-to-day jobs, the challenges they have and even their career aspirations.’
Omar Washington

“If the company doesn’t have a training program, it can become a dead end without a manager’s commitment to your professional growth,” says Kimberly Lee Minor, Bumbershoot’s founder and CEO. “Understanding your talent and what tools and support they need to grow is true leadership.”

Giant Food has several programs that support the careers of front-line workers. The grocery chain hosts career days for key positions in the stores, with a preference to promote from within. Giant also offers the following benefits to its workers:

Giant also conducts an engagement survey to ensure all associates are having career conversations with managers and leaders outside of their direct supervisors, Ciorna says. This allows front-line workers to glean knowledge and perspectives from various members of leadership.

Dionne Holliday, 52, an asset protection manager at Giant Food in Accokeek, Md., started with the company as a front-end cashier and aspired to move up the ranks. She participated in various leadership development programs in which she gained leadership skills to progress to a people manager role.

“I worked in every department before becoming an exempt employee,” Holliday says. “I have worked in the role of customer service manager, perishables manager, store manager and now asset protection manager.”

Sullaimon Safdar, 23, an assistant front-end manager at Giant in Dale City, Va., has participated in a company-led internship in which he has received tips and advice on how to improve professionally. He has also helped organize fundraisers that allowed him to meet new connections and network with leaders in other industries.

“Creating these connections has helped me because it will open many doors in my future, thus creating many opportunities for my career path,” Safdar says.

CEOs and other business leaders can support front-line workers in advancing their careers in several ways, according to Monne Williams, a partner with McKinsey:

Simply offering additional flexibility can also help. This means giving these workers the ability to choose the days when they work and the time they start working, as well as independence and control over how they do the work.

“These might sound simple, but they have a big impact on front-line employees,” said Annie Valkova, an associate partner with McKinsey. “Even before the pandemic, employees were looking to have more control over both when and how they do their job. We’re now seeing that employees have a higher willingness to speak up.”

Omar Washington believes empathy plays a critical factor in supporting front-line workers in their day-to-day jobs and helping them advance in their careers. Research shows that empathy can improve company morale as well as recruitment and retention efforts.

“I think CEOs in general need to really listen to what front-line workers say, particularly about their day-to-day jobs, the challenges they have and even their career aspirations,” Washington says. “A little empathy can go a long way.”

Matt Gonzales is an online writer/editor for SHRM who focuses on diversity, equity and inclusion.

CEO Mentoring Initiative Works with Mentees from Diverse Populations
UK: Are You at Risk of Being Laid Off?
EEOC Solicits Recommendations to Curb AI-Driven Discrimination
Should People Analytics Take Over Human Resources?
Guide to Self-Care for HR Professionals